Book Review: Rising / Falling – Always Hoping: A Journey to a Part of Asia, by Craig Chamberlain 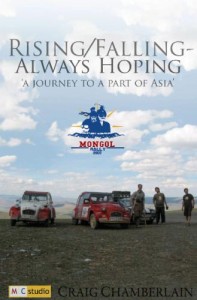 This is the only book written about the Mongol Rally. As many of you know, we are participating in this 10,000 mile adventure across Europe and Asia this summer, so naturally we wanted to size up what the forerunners have done in this amazing race. Rising / Falling – Always Hoping

offered invaluable insight into the inter-workings of a team undertaking the rally.

The book begins with the author and his friend solving the plethora of problems they encountered in registering their car, finding visas and making their ancient car ready to hit the road. Nevertheless, their team encountered an unnatural amount of problems on their route from the UK to Mongolia.

Throughout the race, their team had several breakdowns with their tiny car. It seemed 90% of the book was taken up with the team dealing with their failing auto. At one point they were left with no options on fixing the car, no parts, and no help in the middle of Kazakhstan where they had finally laid waste. In the end, the team was forced to abandon the race and just hope to find someone to haul their dead car into Mongolia. They succeeded in dragging the dead machine to Ulaan Bataar, only to discover that the finale they were hoping for did not exist. They simply left the wreaked vehicle in the appropriate parking lot, and had a Genghis Khan beer and then shrugged and flew back to the UK.

It was a bit depressing to read this tale of wonder and woe, simply because the author’s team had experienced such hardship on the route that it seemed they were not ever enjoying themselves, and always working overtime to achieve a goal that, in the end, was a let down. Nevertheless, the author proclaims the joys of the road only after completing the rally and returning home.