Book Review: The Geography of Bliss, by Eric Weiner 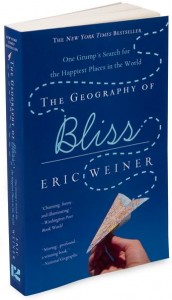 If you are interested in social psychology and how the conceptual understanding of happiness varies between cultures, then The Geography of Bliss: One Grump’s Search for the Happiest Places in the World

is for you. Weiner travels across the globe trying to find the world’s happiest locations. He travels to the Netherlands, Switzerland, Bhutan, Qatar, Iceland, Moldova, Thailand, Great Britain, India and America in search of this aim.

While the subtitle of the book is, “One Grump’s Search for the Happiest Places in the World,” this is hardly fitting as Weiner is nowhere near as grumpy as other travel critics like Chuck Thompson. His commentary, unlike Thompson’s, is not as amusing or funny, but is in depth and offers real insight into the nations Weiner travels to in search of happiness.

Weiner begins his search by visiting the Netherlands, where a group of sociologists study and document happiness. This concept seems not only wasteful (time, money, etc.) but ridiculous in that happiness cannot be quantified (or can it?). Nevertheless, these professors have found a way to measure and assess happiness across the globe.

It was discovered that the happiest nations are the Netherlands, Switzerland and, in general, Western Europe, while the least happy are Tanzania, Rwanda, Zimbabwe and former Soviet republics like Uzbekistan and Belarus. This is not very surprising, claim the sociologists, since there is an obvious correlation between happiness and financial contentment, wherein the poorest nations are hardly happy. Meanwhile, they have discovered (thank god for science) that people with unstable governments and piss poor economics tend to be grumpy (no kidding!) while those who do not live in fear of their government or financial ruin tend to be happier.

Americans rank towards the upper fringes of the middle of happiness, meaning they are somewhat content but don’t take it too seriously. This is not surprising considering Americans have a plethora of problems to deal with but usually manage to do so while laughing. Living in China, many Chinese would ask why Americans view everything as a game or a joke. I laughed in response, but seriously I don’t know the reason.

It is interesting to think of the places we travel through in terms of whether they are happy or not. Uzbekistan, which we spent about a month in last year, was hardly an easy place to travel, and the government and ridiculous policies kept us from enjoying ourselves on a daily basis. Meanwhile, the locals seemed less than content, which is not surprising for an impoverished Muslim nation without resources or sound allies run by a government that thrives on nepotism and corruption. Why are the pawns unhappy, I wonder?

China (along with most of Asia) ranks quite low on the happiness scale, which also does not surprise me. We have spent roughly two years in China and while I’m sometimes shocked and impressed with the Chinese sense of humor, most of the time I find it depressing that the Chinese put so much pressure on themselves all the time and, given the Confucian hierarchy, they hardly let themselves joke around or have fun. But then, the Chinese find themselves in the middle of their ‘industrial revolution,’ which can be an awkward time for anyone.

This is a great book for any traveler who hopes to gain deeper insight into the places he or she visits, but at the same time, happy or not, the world over can only be understood via experiences, so get out there and experience more of it!

One thought on “Book Review: The Geography of Bliss, by Eric Weiner”