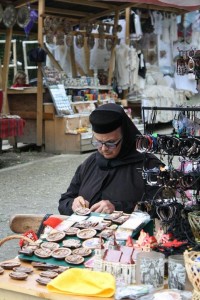 Driving up to Dracula’s castle in a rally car takes away some of the Transylvania mystique that we so associate with the place. We did learn, sadly, that Bran Castle is not actually Dracula’s, as Dracula is a fictional character. He is based off of an actual regional tyrant named Vlad the Impailer, so called because he liked to punish people by impaling them on a sharp stake so that it took them days to die, very publicly and painfully. We learned, also to our dismay, that Vlad only used Bran Castle once on a short vacation, so the actual reason Bran Castle is so famous eludes us. Nevertheless, we ventured forward.

Pulling into Bran, we discovered no screaming people run through with sharp sticks, instead we found a tourist trap of epic proportions. There was every manner of vampire merchandise (save for the horrid Twilight Saga stuff). T-shirts with blood dripping off of them, wigs, fangs, crosses, and strangely, lots of lace. We perused the small tourist shops watching groups of Japanese tourists in matching tour hats scoop up Dracula souvenirs.

Eventually we tired of the balking tourists and screaming merchants so we snapped a few pictures of the outside of Bran Castle and jumped back in our trusty Citroen Saxo. Another castle was perched on a hillside a few miles back down the road, so we decided to visit the less busy, less touristy castle and actually climb up inside it. 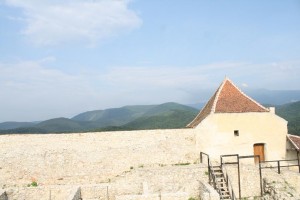 We had split off from our convoy earlier that day, with the Face Race team heading to Bucharest, Romania to drop off a team mate. We had a few hours to kill before we caught up with them that evening near the border with Moldova, so we decided that we had plenty of time to see another castle. One hardly ever tires of castles, I’ve found.

Finding parking was easy, so we walked up the hill to Rasnov Castle, which was apparently past business hours at six in the afternoon. We walked through the main gates and up into the chambers of the castle. Much of Rasnov is in ruins, but a panoramic view from the top of what must have been a look-out tower or platform gave us one of the best views in Romania. We walked around admiring the old structures (many of which were under construction) and finally walked back down to the car. We had a lot of miles to cover that night before re-uniting with our convoy and heading into Moldova.