Budapest, Though Buda more than Pest 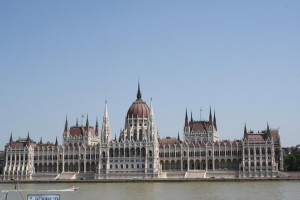 Budapest has received a lot of fan fare in recent years for its bohemian settings and casual expat culture. We got to experience a bit of this for the few brief days we were in Budapest. First, the city is divided in half and together Buda and Pest comprise the metropolis of Budapest, the river dividing them neatly in half. Beautiful bridges connect the two townships, making them one.

The older part of town and, incidentally, the side most tourists visit is Buda. In Buda you’ll find the old town citadel and the famous labyrinths that run beneath it. A sign informed us that the catacomb labyrinths beneath us were one of the seven underground wonders of the world. God knows what the other six are. We toured around the cathedral and admired the view from atop the hill in Buda, looking over the river and the steady development in Pest. Strolling around, Buda could be any beautiful city in Europe, with fashionably clad women and business-minded men briskly going about their day. 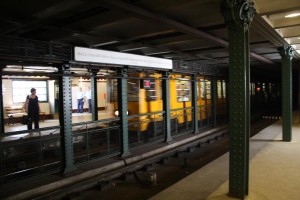 Budapest boasts one of the oldest metro systems in Europe. We decided to take the subway to check it out. Leather straps dangled from metal plates inside the cabins on the subway, while real glass windows let passengers look out into the beautifully crafted subway platforms of tile and mosaic. It was extremely impressive, and efficient. The subway connects travelers with bus and above ground train stations so that mobility in the city is easy.

Pest, where the city’s modernity begins to shine through, is where we stayed. Naturally, prices are cheaper in the peak season in Pest, and our campground was only a few Euro a night and nestled neatly into the middle of a public park. We jumped on the tram heading north to take a tour of the Budapest Torture Museum. Obviously not my idea, but I was along for the ride. I’m glad we ended up going, as I learned a great deal and someone has invested a large amount in the facility, making it one of the most in-depth museums I’ve ever visited. It happened 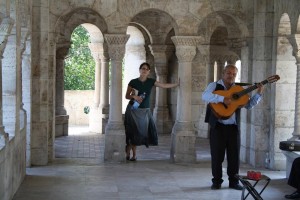 to be free for people under 26 the day we arrived, so I got in for free while Mike, having forgotten his ID, decided to wait outside. Bill paid for his ticket (old man!) and we made our way up a flight of stairs to view a real Soviet tank in a small room that was comprised entirely of pictures of deceased Hungarians. The tour would only become more sobering as we went on. In all, we saw the cells where prisoners lived, the gallows where they died, the torture chambers, and several videos made from victims who calmly explained what went on in the building. Finally, we emerged from the building into the sunlight with a lot of information about the Soviet invasion of Hungary, and what that meant for the people of Budapest. I’d highly recommend the museum, but plan to be shocked. There is no “politically correct” concept when it comes to displaying text and images.

Back at the campground we managed to do a bit of laundry, stringing a line from the car to a nearby fence. We cleaned out the car (which was much in need of attention) and Bill did a once-over on the car checking the wheels, engine and poking his head around under the belly of the beast. All was in order, so we set off the following morning for Romania.

blogsherpa buda budapest hungary Mongol Rally pest
Previous PostOradea and the First Gypsy Next PostBudapest, Hungary and the Case of the Sad Sorry Side Wheel