Bukhara is The City Synonymous with Medieval Torture 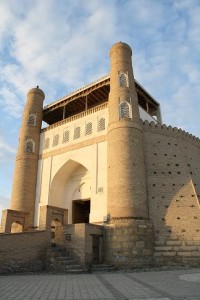 The Emir's Ark in Bukhara

It was in front of The Ark that Stoddart and Connolly were executed at the Emir’s request in 1842. It had all started innocently enough when Colonel Stoddart was sent to Emir Nasrullah’s domain to reassure him that the British invasion of Afghanistan would not continue into his fair kingdom.  Stoddart arrived with a letter from the governor general of India (rather than the Queen) and, contrary to custom in Bukhara, rode into the castle on horseback rather than walking. These were his two primary offenses to the Emir, who promptly threw him in prison for his disgraceful entrance. This was no ordinary prison, the Zindon prison has a special cell for the worst offenders that is lovingly referred to as the bug pit. This pit is roughly twelve feet deep and only accessible by a rope lowered down through a hole in the center of the ceiling. Into this hole the prison guards gingerly poured daily doses of scorpions, rodents and other vermin. Stoddart was to languish in this pit alone for a year.

In 1841 Captain Conolly traveled to Bukhara to request Stoddart’s release, but, likewise threw the man in prison on trumped up and ridiculous charges.  At least now Stoddart had company in the infamous bug pit of Zindon. Likely the Emir would have let the two languish in the pit indefinitely had the British forces in Afghanistan not been repelled and defeated in 1842.   Believing the British to be a weak nation with an unsuitable army the Emir, nicknamed “the butcher,” paraded Stoddart and Conolly through a large crowd in front of The Ark where they were instructed to dig their own graves, and on June 24th had them executed via beheading to the sounds of drums and reeds.  The Emir’s calculations about the British proved correct as no reprisal for the executions came from the British government.

Having visited The Ark and Zindon, we were shocked at the horrible conditions of the bug pit, but more so by the giant debtor’s prison cell which, at any given time, was completely packed with people owing money to the State. A small museum on the premises showed how the Soviets later used Zindon for political prisoners.

In another part of the city the world’s tallest minaret was erected by Arslan Khan in 1127 called the Kalon Minaret. Having killed an Imam after 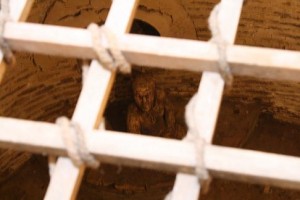 Stoddart and Connolly’s But Pit

a fight, the khan was terrified when the Imam appeared to him in a dream and demanded that his body be buried where no man could walk on it. Thus, the terrified Khan commissioned the minaret. Legend also says that when Ghenghi Khan invaded the region he was so stupefied by the sight of the tower that he had it spared while the rest of the city was burnt to the ground. In later times, this happy and historical minaret was used to execute prisoners, who were tossed over the side into the public square below.

3 thoughts on “Bukhara is The City Synonymous with Medieval Torture”