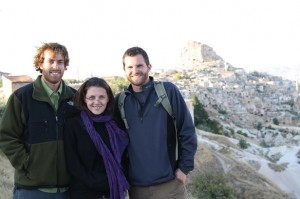 We arrived in Cappadocia extremely excited and giddy, having seen the fairy towers out the bus window. We checked into the Traveler’s Cave Hostel, on the fringe of town, which landed us a three person cave room carved directly out of one of the spires. Though our bags were heavy we were light of foot as we headed into town to gape at the larger fairy towers.

A fairy tower, contrary to what I thought (and hoped) is actually ash from a volcano explosion a long, long time ago. Ash, when it makes contact with air, hardens. So, when people put Obsidian tools to the piles of ash and carved caves, they hardened and were a safe dwelling from the elements. Wind and water eroded the exterior into spires, which look super cool and are fun to climb on.

It was late by the time we got into town, so we stopped at Fat Boys for drinks and discovered a Risk board game set, which we proceeded to set up. Until late, we stayed at the pub, had dinner, and attempted to dominate the globe.
The next morning we got up early, having booked an all-day tour of the surrounding area to maximize on what we could see in our minimal time in Cappadocia. The tour group, which was composed of a plethora of young adults from India, Italy and Japan, left at 9:30am with another minibus full of tourists, and an over eager guide named Manchuria. Our first stop was to see the Red Valley structures, which people of antiquity carved into homes for themselves. We snapped photos like true tourists and were mobbed by people selling dolls and scarves.

Our second stop was to the Underground City, which was an 8 story deep ant-hive like network of tunnels and rooms which could hold up to 10,000 people in times of turmoil. People ran down into the caves to hide from enemies, and had such soft limestone walls that they carved out churches, livestock holds, and sleeping quarters—a full city underground. The tunnels were, at times, so small that Matt and Mike had trouble fitting, though I felt that finally something was just my size!

We headed in our mini convoy to a beautiful gorge, where we did a 3k hike through cave ruins along a riverbed, ending at a restaurant where we all dined. From here we set off, stomachs full, to a small town of fairy spires, which was the highlight for our merry group. We had been joined by two other Americans named Sam and Max, who had traveled from Africa and the Middle East to be in Cappadocia. Now we were 5 cube abandoners, and we all fidgeted as the tour guide explained to us not to go into the far left chamber of the highest tower. 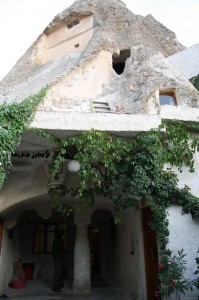 When the tour guide finished we all went to the far left chamber in the highest tower. Never tell an American not to do something, is the lesson here. We found a crumbled stairway leading straight up into the royal chamber. We climbed up until the tunnel became dark, and then retreated as the tour guides screams started to echo off the walls. We felt like kings, or archeologists, discovering something unseen. Many of us were cut and bleeding from the rough climb, but our smiles were ear to ear as the guide winked at us. I think she told the group not to go to protect the weaker climbers, full well knowing our mini group would attempt the climb.

We next headed to the pigeon valley, a panoramic view of awesomeness. We were all cold by that time, and hungry, but the view was something not to be distracted from and we all stared into the valley reflecting on the day. A tour of a jewelry factory followed, which we hurried through before heading back to town. We quickly had a few drinks and checked out of our cave and bought bus tickets to the Mediterranean Sea Coast, which would be an overnight bus landing us in Olympos by 8am the next morning.