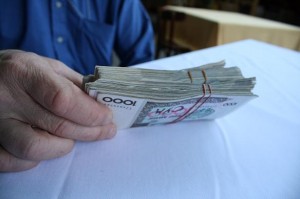 One of the strangest, and most frustrating things about traveling in Central Asia has been the double standards related to costs. As Americans we take for granted the amazing equality we have inside the country. True, we have problems, but one would never walk into a museum and be charged a different fee because of the color of his skin. That is not so in Central Asia.

In Uzbekistan, for a local to get into the Registan it cost 200 CYM, for a foreigner it costs 7000 CYM. Similarly, to get into any sight in Khiva, a foreigner must buy a city-wide pass that costs roughly $7 USD while locals can pay to enter whatever exhibit they want for free or for pennies on the dollar. Can you imagine the same practice in the US?

For a local in Turkmenistan to get into the underground lake it costs 3 Minat, but 30 Minat for a foreigner. (Thats the difference of $14 USD). We drove over an hour to reach the underground lake only to be rudely shoved aside by a guard who demanded fistfulls of cash. In this stubborn instance we turned on our heels and left the park, a $14 USD difference is not only unethical, its downright discriminatory. 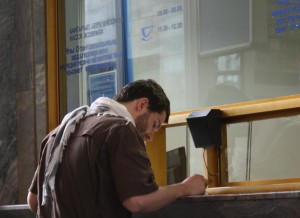 And cash is not only demanded at ridiculous sums, its sometimes simply taken. In Kazakhstan we  were hassled by police, guards and railway attendants who demanded money, and when it wasn’t give they patted us down and took it anyway. A strange way to treat a visitor.

On your customs forms in Central Asia you have to list how much you are bringing into the country. We’ve heard of other travelers who didn’t report all the cash they were carrying, and as a result corrupt guards simply took the extra cash and laughed away all complaints. On the other hand, if you do list how much money you have you will get shaken down by one of the custom’s officials pals. Catch 22. We stick to withdrawing small sums out of ATMs, though even that is tricky.

Don’t get me wrong, I love traveling here, but the money issues are a bit annoying, and it really makes me appreciate the countries we’ve visited that don’t discriminate based on country of origin.