Chinese Mega City in the Works 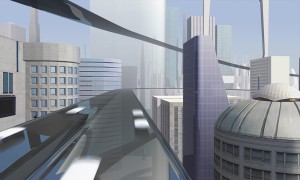 From the most populated country in the world plans to build a mega city to house some 42 million doesn’t seem that surprising. China is already home to the largest port and biggest city (Shanghai) as well as home to the 1/5th of the world’s population. Costing 2 trillion yuan, the project to merge 9 smaller cities around the Pearl River Delta would cause water, communication and transportation networks to merge. Urban planners think the 150 projects in the planning stages to merge the cities will, ultimately, reduce pollution, drive down prices and increase resident happiness due to better transportation, lower prices and jobs.

The problem is, most infrastructure gigs are given to migrant workers. Case and point- the subway going in near my house. They quickly (and quietly) threw up a three story shack one day in an empty lot. A few days later they installed power, a day later a busload of folks from the countryside began to toss their tiny bags of belongings into tiny bunks before tightening worn out belts and starting up the construction equipment. The Beijing subway may expand the jobs market in Beijing eventually when it hires drivers, ticket sales and security, but right now the new line under construction is only bringing more workers into the city. 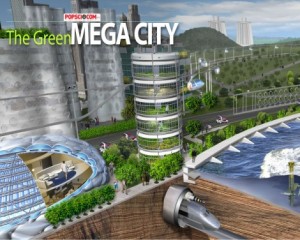 Mega cities may be an increasing thing in the future. Check out the work on green mega cities that was featured in Popular Science. This work was done by PopSci.com and features plans for the city as well as the good and bad news about population increases and mega centers of society. This cool city has alge farms, sidewalks that gather energy from footfalls, wind turbines powered by gusts from passing highway cars, and much more. Its really cool and the towered farms are something that could be constructed now. Take a few minutes to watch the demo slide-show that explains all the unique features of these preplanned cities using the link above.

Like the mega city plan (image right) the lillypad design by Vincent Callebaut,  tries to build on the green concept. They are floating cities that look like lilly pads, hence the name. It free floats around the gulf stream or can be anchored to near shore. Each city holds 50,000 people and is entirely self sufficient as well as eco-friendly. It was created to hold climate refuges, and its floating design makes it possible for humans to exist in what Callebaut seems to think will be a world where land is scarce. The designs are cool, and the imagery is amazing. Check it out using the link above.

I think it would be amazing if China were to use this opportunity to make a green mega city, or to start plans on a massive green city elsewhere in China. With such a massive population, these cities may be extremely useful in China, and open up more land for farming around the cities.

One thought on “Chinese Mega City in the Works”