Lauren really wanted to go ahead with our plan of 6 capitals in 6 days. Therefore, after our few enjoyable days in Sarajevo, we booked a night-train to leave that same evening. The train station was located right next to the Holiday Inn where journalists from around the world were holed up during the war. The buildings around the train station had not been renovated as well as those in the city center and Old Town. There were bullet holes and shell bursts visible all around.

Night-trains, in our experience, have been really nice cabins with bungalows and you get caught up on a lot of sleep while you save money on accommodation traveling to your next destination. These night-trains easily have been our favorite way to travel. This was a completely different experience. As we walked up to the platform, another train pulled up on the neighboring “paron”. As it came to a stop, a mad dash was made for our train. Lauren and I exchanged a quick look and then dashed toward our train. We have discovered that if the locals do it, there is a pretty good reason for it. What we soon realized was that there were no assigned bunks or seats on the train at all. People were running around opening curtains, cabin doors, and switching lights on and off in search for their preferred cabin. 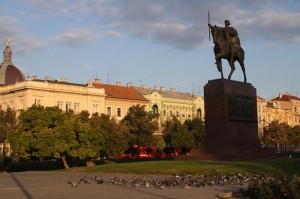 We found an empty cabin that had no bunks and threw our packs on the chair. Everyone was searching for a semi-empty cabin. We were confused about the situation: Was this it? Would we change trains in the middle of the night? Are there no beds? This was, by far, the most expensive ticket we had purchased yet and it was Euro-rail, which has been said to be the best. The night continued as we laid down on the chairs and tried to sleep. Although no other passengers decided to join us in our cabin, there were several other issues that made this train ride the worst train ride of our entire trip – even worse than the corrupted police train ride from Kazakhstan to Uzbekistan.

We were lucky enough to have heat in our cabin. However, the knob was broken and we were pouring sweat. There was no way to turn it down so we were forced to open a window. Each time we passed through a tunnel, the window would slam shut and then pull all the way open. Moreover, over the course of only 6 hours, we were awakened more than 8 times to have our tickets and passports checked. This was mostly because we exited Bosnia & Herzegovina, entered and exited the Serbian controlled area (SR) in the North of Bosnia & Herzegovina, and then entered Croatia. 45 USD lighter each and 6 sleepless hours later, we arrived in Zagreb, Croatia. Then we found out there was no way to get out of the city! There was only one train for Slovenia, which left in the next 2 hours. We walked with our packs down to the bus station and got the usual tourist runaround just to find out that they didn’t have a single bus that went to Ljubljana, a neighboring capital, only a few hours away. Although the city square and architecture looked beautiful, we only had enough money to each breakfast in Zagreb – after purchasing another overpriced Euro-rail ticket to Ljubljana, the capital of Slovenia.

One thought on “Croatia for Breakfast”