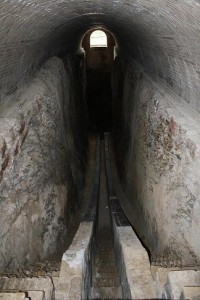 After taking a walking tour of several mausoleums and the ruins of Ulugh Beg’s (the famous Central Asian astronomer) observatory, we decided to search for the tomb of Daniel as well as an archeological museum around Samarkand. Walking in front of Timur’s family mausoleum, we saw a vast cemetery on the outskirts of Samarkand. Tombstones with engraved images of those buried below stared back at us during the long walk through the desert between Samarkand and the observatory. On the way, we saw caves and holes in the cliffs upholding the cemetery. It was easy to imagine people being put to rest all over the surrounding valleys hundreds of years ago. Long funeral processions probably carried bodies to these ledges by cart or human and paid enormous sums of money to have their loved ones placed on the hill overlooking Samarkand.

After a long walk in the sweltering heat, we arrived at an oasis of sorts, full of trees and shade. At the top of a long row of steps was the remaining wall of Ulugh Beg’s three story observatory, unearthed in 1908. A small museum with records and information about Ulugh Beg and other Central Asian / Middle Eastern mathematicians and astronomers stood on the north end of the hilltop. The only thing remaining of the observatory was the rail upon which the telescope rolled. It was quite impressive, standing at the top observing the curved stone rail with notches of grooves from the top, as well as the ancient stairs leading down into the chamber.

After a while spent admiring the observatory, we took the wrong road north after the observatory and walked an additional 3 km. Once we found the right road, we walked down a nice lane with tree rows planted on the sides and cotton fields spanning out into the distance. On the corner stood the Hazrat-Hizr Mosque, which was built in the 8th century and mistakenly was not facing Mecca. Later, an architect corrected this mistake and has since, been deemed a prophet. Ghenghis Khan burned the mosque, along with several of the cities’ inhabitance, to the ground in the early 13th century as the Mongol hordes made their way West. Down the road, Lauren noticed a small sign marked “mausoleum” in Uzbek. We walked down the long winding road along the banks of the river and discovered a tomb on top of the hill and a natural spring at the base. Several people were washing in the spring and drinking the water. Now, I would have considered taking a drink from Daniel’s spring if I was 100% sure that it was Daniels tomb – I enjoy taking a leap of faith occasionally. However, there are a reported six tombs of Daniel spread throughout the Middle East and Central Asia. 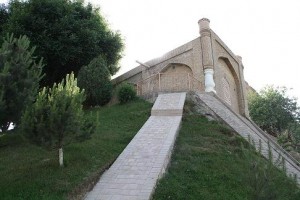 The Bible places Daniel from Daniel and the Lion’s Den, in Babylon – modern day Iraq – at the time of his death. Similar accounts also state that the location of his body is in Susa, as well as two other purported locations in Iraq, and one in Iran. Uzbekistan claims to have the real body of Daniel because a legend states that Timur (Tamerlane), unable to conquer modern day Syria, believed that the body of Daniel was preventing his success. After a successful battle, Timur apparently ordered the body exhumed and brought back to Samarkand for good luck. After burial a natural spring sprouted, which locals claim has healing powers. However, this is simply local lore and I grew even more suspicious as we viewed the tomb marker.  I ducked my head under a doorway and entered an elongated room that contained a 90-foot burial marker. My jaw dropped. The guard then explained that each year the body grows “x” amount. One person told us, 2 inches a year. If this were the case, the body would be more than 2000 inches long, which would be much longer than the marker. I have attached the picture of the tomb and I am curious to hear comments on peoples’ belief or non-belief of this miracle or mockery, depending on your perspective.