Dinosaur Eggs on the Journey to the Caspian 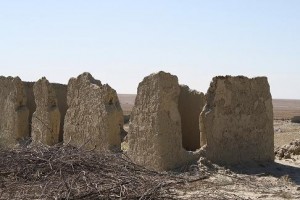 We decided to take a weekend trip out to the Caspian Sea from Ashgabat.  Leaving mid-afternoon on Friday we planned to stop in the small village of Nohur in the heartland of Turkmenistan – the Ahal Region.  Located between the Kara Kum Desert and the Kopet Dag Mountains to the South, the Ahal Region boasts a long Silk Road history as well as ties to Alexander the Great.

On the way to Nohur, we passed the ruined city of Murche that also holds the tomb of Zengi Baba – the patron of cattle breeders.  Zengi Baba comes, most likely, from the Zoroastrian reverence toward cattle.  The ruined city of Murche, crumbling mud walls, spreads the distance before the foothills of the Kopet Dag mountains in the background.  Murche was eerily silent but one of the more interesting attractions around Murche and the Zengi Baba mausoleum are the assortments of fossils.  Surrounding the mausoleum and small tree grove, sit several fossils of choral, amphibians, and even what are said to be dinosaur eggs.  Many people argue that they were cannon balls put on display.  However, one was cracked in two and the central of the fossil had what could be argued to be a yoke.

After walking through some of the ruins and picking through the dirt at the hundreds of pottery shards, we got back in the car and proceeded towards the turn off for Nahur.  Another hour or so farther down the road, we passed Archman and missed the turnoff.  Luckily, the Brandt Guide mentioned a really small green sign that marked the turnoff to Nahur.  Eventually we spotted the sign and bounced down the bumpy road toward the mountains.  We climbed from sea level to about 1000 m and saw some amazing landscape.  The people of Nahur claim to be direct descendants of Alexander and his army.  We noticed more pale blue eyes in and around Nahur than anywhere else in Central Asia. 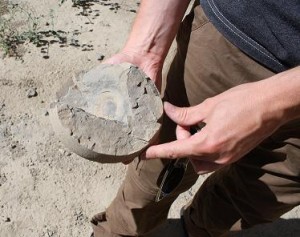 The dusty desert slightly gave way to more mountainous terrain.  Strange mountains were widdled down to sand dunes or piles of shale.  Large lizards, only a little smaller than a coffee table were visible on the rocks.  They would dart out of view just as the jeep would round a turn or bend.  Farther up the mountains, we could see small areas of green leading us to believe there were hot springs other geothermals in the area.  After about 10-15 km we reached the city of Nahur with ancient stone buildings and homes.  It was an eden in the middle of the desert mountains.  However, we had no idea how much farther we had to go to get to the Caspian.