Mike in the Creep Zone

Although not in any guidebook for the area, our hostel owners told us about a cave not far from town that we could get to only via a cab. We linked up with Emily and decided to try our luck negotiating a cab to the spot. When in town, we easily found an elderly man (in his 90s!) who agreed to take us in his equally ancient Lada car to the caves. We all piled in the death-trap of a car and rattled off into the hills.

Our friendly driver deposited us safely at the entrance to the cave, where a national park ranger who looked like the sneaky guy in Mr. Deeds told us to wait fifteen minutes. In my broken Russian I understood him to mean that an event happened every hour on the hour in the cave, and we sat about for fifteen minutes pondering what the event could be: feeding time for the bats, or an old faithful type explosion?

The event turned out to be a guided tour by the Mr. Deeds sneaky guy, who laughed at our ridiculous expressions when he unlocked a large metal door covering the cave entrance. Inside, he flicked a series of switches and the cave was semi-illuminated. We climbed down into the belly of the cave, and listened to the dripping as he explained that it took a century for the stalactites to grow one centimeter. In front of us were stalactites and stalagmites that ranged from inches long to over a meter. A group of Georgians joined our tour and translated for us along the way, instructing us to keep a wary eye out for some of the white bats that call the cave their home. 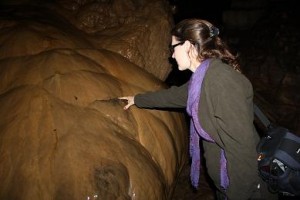 Reaching into the Heart

We inched ever deeper into the cave as the guide hopped around like an expert spelunker with night-vision capabilities. A hole in the cave a meter off the ground turned out to be a cave 30m into the belly of the beast, which our guide proudly said he had explored. “That’s where the spiders and worms live,” he said, as calmly as if telling us about his boring day.

We snapped pictures, letting the flashes of our cameras illuminate further into the cave than the eye could otherwise see. After what felt like forever (but turned out to be about ten minutes) we reached the largest of the stalactites, which our guide called “the heart” there was an opening and we were instructed to reach our arms into the opening and feel how soft and cool it was inside. I let everyone else go first, hoping the plethora of arms reaching into the heart would scare away any albino creatures inside. It was indeed squishy and wet inside the heart, and I held my hand into the abyss as long as possible before a tickling (or imagined tickle) made me jerk my arm out to the guide’s endless amusement.

Outside the cave again, and thankful for the light, we scampered up the hill to the driver and asked him to take us to some dinosaur footprints we had passed on the way in. These turned out to be two large limestone platforms with various sized giant-turkey footprints from ancient dinosaurs. We walked around atop the limestone like you’d never be allowed to do in the States, and took pictures of our hands inside the footprints, and our toes looking tiny inside the claw prints. After a while, the driver took us half way back to the city before jumping out of the car and running into an alley. He returned a while later with pomegranates fresh from a tree, and then we putted off down the hill into town again.

One thought on “Dinosaur Footprints and Creepy Caves”