When one Abandons the Cube one has little money. Still, with a bit of creativity you can do wonders. I was reading a few blogs and came across a lovely idea to make a headboard out of cardboard. Stop! Don’t click away, it’s true! You can do it and not have it look like a piece of trash. This blog post, in particular, had a lot of neat ideas. I went a different route ultimately, but this was a nice bit of incentive. Thanks Michelle!

I started out by cutting the shape I wanted out of a giant piece of cardboard. We had recently purchased a crib for our infant and the box was perfect and in good condition. I used a basket to draw the rounded parts on the cardboard and then used the old adage of measuring twice and cutting once. This headboard is seven feet across and four feet high in the center. The two winged edged are three feet high. 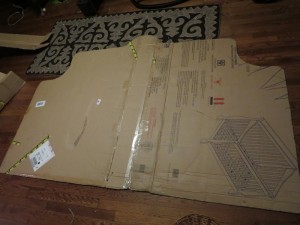 After cutting out the shape I wanted, I used all the Styrofoam padding the crib had been wrapped in. I laid out the large sheets and then cut them to fit the cardboard shape. I used packing tape to secure them to the cardboard. I used a knife to cute the shapes to the exact dimensions of the cardboard. Much easier than scissors. After this, I used the foam wrapping that came with the crib to wrap around my frame to give it more shape and erase some uneven edges. I taped this all in place. 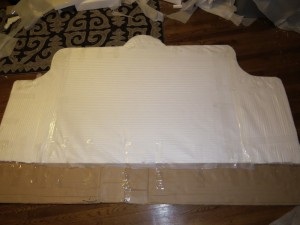 At this point, I had fully intended to make the headboard come all the way to the bottom of the piece I had cut out. But, I ran out of Styrofoam and foam wrap so I cut a clean line along the bottom.

I got married recently and had a burlap and lace vineyard wedding. I still had strips of 7 foot long burlap from the table runners so I grabbed these and decided to do a woven pattern of burlap across the padding. I thought this would be a nice, neutral color for our bedroom. Weaving isn’t easy, but the strips were not clean cut and I didn’t think trying to line them up would look nice so it was the only real option. Plus, I already had it on hand and it was free.

So, I took the strips and put them atop the frame and kind of wove them together. Once I had created a mat I used hot glue to tack the bottom and left side to the frame. When it was set I went to the right side and pulled the strips tight, tacking them down. 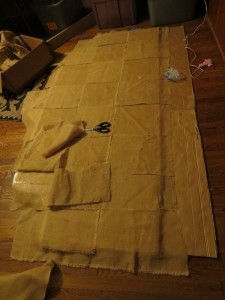 The hardest part was the uneven top. This would require a lot of pulling and tacking, waiting and pulling some more. Once I got the top secured I thought the weave looked pretty nice. It still needed some embellishments. I stenciled on a few black shapes. 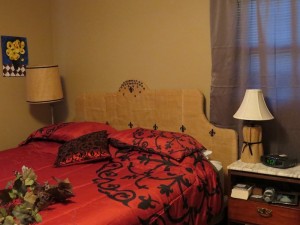 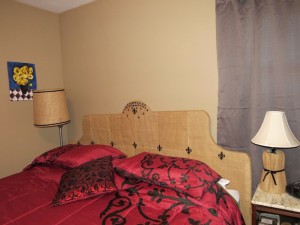 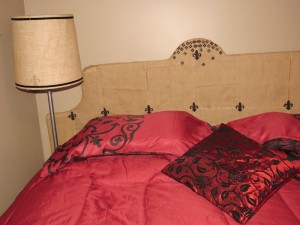 On a side note, a few days ago I made a burlap lamp shade and then a burlap lamp base out of more of the leftover burlap from the wedding. To make the larger lamp shade I took the old one and used a stencil to cut flour de lune shapes using an exacto-knife out of the crusty lampshade fabric. Then I pulled burlap tight over the whole frame and used hot glue to tack it into place, pulling as I went around the edges. I trimmed it with velvet ribbon. When the light is on, the shapes appear and add a nice elegant touch. I used hammered spray paint to cover the once gold stand and kind of update it. You can see the lamp on the left in the image above.

To make the smaller lamp stand (see the images above, lamp on the right) I found a frame at Goodwill and used hot glue to tack the burlap in place. I used the same velvet black ribbon to bunch in the center, giving it an elegant look. I had the old lampshade in the attic already.

These lamps were put in the bedroom to kind of pull it all together into a burlap room. Too much? Not enough? If the walls were a different color I think it would look nicer. Also, the wall isn’t big enough to support the headboard (doh!) so the whole setup is off to one side.

At any rate I didn’t spend much to make this stuff. We had the old lamp and burlap on hand, all the cardboard and padding were here, the tape was already here. The only thing I purchased was the hammered spray paint, the smaller lamp frame and the exacto-knife. I simply scrounged around with a bit of creativity and pulled it into a headboard and two lamps—and a whole new bedroom look. Thoughts? If it sucks, be honest!