I must be in the DIY mood because I have about nine big projects going on around the place. I just finished upcycling a perfectly good dresser. Read about that here. And I’m upcycling a desk and table as well. I got a great deal from the ReStore on 8 foot boards so there is a pile of that in the carport, and I have been building my own art frames, so I have molding all over the den. My yard is starting to look like a traditional North Carolina junk heap of well-intended projects in various states of ill completion. So, with all that going on why not toss on one more project? A themed Cake Boss-style cake!

Today’s project was a fancy cake for my cousins’ birthday. Wolf and Max are young teenage boys who are throwing a Duck Dynasty-themed birthday party. So, after getting on the interwebs I discovered Duck Dynasty to be four bearded men in headbands who make whistles. Odd premise for a business but apparently it is quite successful.  I decided to make a rolled camouflage fondant with a duck on top. Apparently one character is fond of repetition and says, “happy, happy, happy” quite a bit in a mostly ironic way. So, the top will say that with “birthday” on the side.

I made my own fondant out of marshmallows, confectioners sugar and water. It was easier than I imagined and rolled on well. I dyed it with typical food dye and put it in the fridge overnight to harden or cool or whatever happens to marshmallow molecules when chilled.

Next I rolled out little bits and made a camo pattern and kind of pushed the chucks into place and pinched them together. Other tutorials miss this pivotal step. You can’t just roll like this because the chunks will separate. Pinch it all together before you roll. Yeah, it looks like a bunch of cat puke and poop, but it will look better when it’s done! 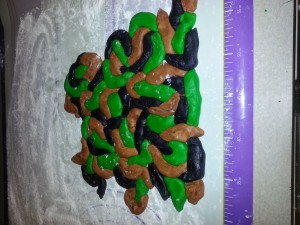 Then I found a curtain rod, washed it and rolled the fondant onto that because it was wider than my rolling pin. This is when my husband walked in and asked why I was decorating a curtain rod. 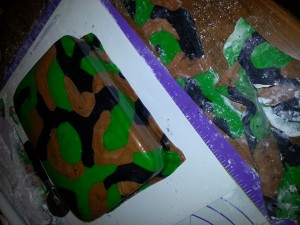 Finally, I rolled it on top of the cake and cut off the excess with a pizza cutter. Very clean lines this way and easier than a knife, which can cause the fondant to tear. You can see that I left a bit of extra. Later I decided this looked silly and cut it off but originally I was thinking of textured the whole thing like fabric and making it drape. Then I realized the cake was for boys, and that was a lot of effort for lads who wouldn’t really care past the first glance. 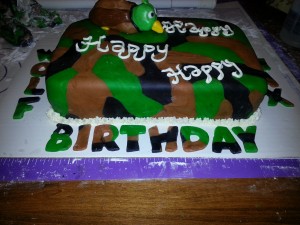 Here you can see the finished product. I cut out some letters with a little jello mold set and hand piped some lettering on top. I also made a duck out of rice crispy treats and rolled fondant. After I was done my husband said it looked like a platypus. Oh well. There were not many mallards walking about when I was molding it. I also piped on some texture around the base. It didn’t really need it because the cut was clean but I figured why not? And I had extra icing.

So there you have it, I made a cake, made my own fondant and made a fondant duck. Suck it Buddy from Cake Boss, my cake is pretty damn good for a noob!