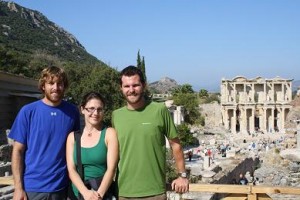 Us infront of the Library in Ephesus

After posing ridiculously on all of the old ruins and monuments we could find in the three ancient cities and camping for the night, we woke up to the sound of an alarm at 6:00 AM so we could get the rental car back in time.  I had lost miserably at every game of cribbage the night before, so Lauren and Matt were in extraordinarily high spirits the next morning.  We quickly broke down the tent, lit an Esbit, and heated some water for an awesome breakfast of instant oatmeal (thanks Matt + Mom) – which really hit the spot.  It was fairly easy navigating our way out of the city and back toward Ephesus.

On the way we stopped at the alleged home of the Virgin Mary, which was on a hilltop just outside Ephesus.  After driving up the passage, we discovered a very steep entry fee and couldn’t really justify paying the Turkish government that much to see what has only been verified by the Vatican and a German lady’s dream.  A little bummed, we descended and drove back towards town and dropped the car off.  We bought our bus tickets for Cannakale, stored our backpacks at the bus station, and walked 3 km down the road towards ancient Ephesus.  Our only slight disappointment about the Virgin Mary’s house quickly diminished as we entered Ephesus.  Unlike all the other ruins we saw, Ephesus was packed with tourists.  It was amazing as we walked down the magnificent marble streets, weathered by time and tread, to see it bustling with people. 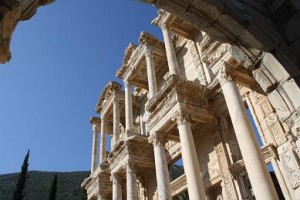 We found that Ephesus was not in ruin at all!  Millions of people come here every year from all over the world.  Most impressive was the Great Library of Ephesus, which the Germans kindly rebuilt the front to its former glory.  The amphitheater was also a big hit, seating over 20,000 people.  We saw road markers, with the text marked in red, commissioned by Caesar Augustus. Ephesus is a must see, but the other less toured ruins should not be missed.  It was nice to have this dichotomy of empty and packed ruins as it helps connect past and present together.  After several hours in Ephesus and witnessing a gladiator reenactment, we got on our bus to Cannakale.  Ephesus was a great experience for us as well as for all the other people there, many of them senior citizens.  I heard on old lady say with a tear in her eye, “I have wanted to come here my entire life, and now I can’t believe my eyes.”

3 thoughts on “Ephesus is Still Alive”