Eugene Oregon and the Best Accident

We packed up the minivan and decided to head south to see two longtime friends and adventurous souls who live in Eugene, OR. The drive was pleasant down ol’ I-5, and we arrived made great time without incident until we got to the lovely and illogically grid-like, one-way nightmare of downtown Eugene. We thanked Map Quest for their incorrect instructions and, without cell phones, decided to head towards the only hill in the city for a better look. Turns out that was the hill they lived on. Problemo solved.

The following morning, after an informative and retro night on the town,we ventured to a local hot spot, Off the Waffle, for some breakfast. A nice treat there, and then a quick peek at a vintage book store where I found a rare book on exploring Central Asia for herbs, before we decided to hike to the top of Eugene’s hill for a better look. As Mike was backing up the trusty Toyota, there was a bit of a mishap that doesn’t bear retelling. Suffice to say Mike can never make fun of how I drive again. Ever! Score! This was the best accident of all time, in my book. 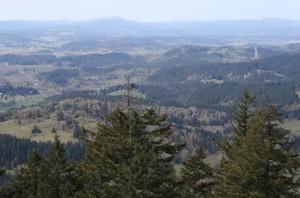 Eugene is a very unique city. In our limited time there we saw that very few large corporations have penetrated into the city’s center. Anti-expansion laws have made property prices skyrocket, but there are no suburbs full of Wal-Marts or Home Depots either. Independent restaurants and cafes dot the city, and the uniqueness is almost overwhelming at first. Americans seem to like arriving in a new town and having it look almost identical to the town they left. McDonald’s, Walgreen’s, Target…. all of these places are lined up on consumer alley (or main street) in almost every American town of any size. Eugene is a breath of fresh air and shows what America could look like if it wanted to. It reminded me of why I disliked traveling in the USA– every time you arrive somewhere new you feel like you haven’t left home yet.

While traveling to Eugene made me aware of all of this, it was also pleasantly different, and we spent a few days soaking that in. The higher prices were well worth it to try so many new things. By the way, at an independent grocery store I found out there are literally thousands of different kinds of cereal. Turns out if you shop at a name-brand store they get to decide your menu for you. And here I thought all along there were only a few kinds! Silly me. Eugene’s independent grocery store had two isles of bulk cereals. You take as much as you want, mix and match, add accompaniments, and you’re off! Don’t get me started on how many kinds of juice there are. I did not think you could find lychee juice outside of China. Anyways, suffice to say we liked Eugene.

One thought on “Eugene Oregon and the Best Accident”