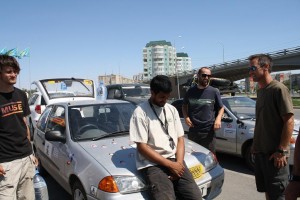 As with all good things, it was time for our little convoy of three cars to end. The Abandon the Cube team had visas and plans to head into Uzbekistan, while the FaceRace and Schumacher teams would head straight across Kazakhstan. As we neared the border with Kazakhstan, we decided to make the most of our remaining time together. After crossing the Russian-Kazakh border (we’ve become pros at border crossings, recently) we camped inside Kazakhstan just outside of Aterau. The road conditions were decent, but were the worst we had seen thus far on the rally. Pot holes would appear out of nowhere that were the size of small cows. More dangerously though were the ripples made by trucks on the roads so that the pavement was not flat, but consisted of two ridges in each lane. Small cars like ours had to drive on top of the ridges or else risk ripping apart the undercarriage. Because of this, the going was a bit slow. Add to this the fact that camels abounded in the area and, at night, camels venture onto the black pavement roads to soak up the heat of the dark cement.

We pulled off the road. It was entirely a flat region so there was no cover for our tents and cars. We decided to camp anyway, and after a bit of roof riding by Lauren, and a bit of football playing by the Brits, we pulled our cars into a flat area and began to set up our tents. We wanted our last evening together to be fun, so talk of a campfire raged through the camp. But, as we were setting up we noticed ants all over the area. We traced them back to hives all around the flats. There was nowhere to go to escape them. While we were investigating the strange ants, the mosquitoes emerged. I don’t expect there are many people on the planet who like mosquitoes, but this was ridiculous. If you pointed your flashlight above someone’s head you could literally see a grey, moving cloud of humming mosquitoes, diving in for the kill. Only Bill and Mike were able to stay outside their tents long enough to cook some quick noodles. Everyone else huddled in their tents, scratching their bites and watching for ants. It was like a bad Indiana Jones movie, with strange insects closing in on us from all sides. 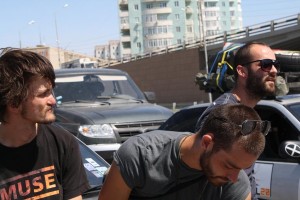 Despite the annoyance of the bugs and the extreme, lung-halting heat, we managed to get a few hours of sleep. In the morning, we pushed on to Aterau and arrived fairly early. We found a bank and quickly changed money, then decided to have a group lunch together before we split up. Parked outside a shopping center, another rally team pulled up consisting of two middle-aged men who worked as deep-sea exploratory oil divers. We all went to the town’s Irish pub. Apparently there were hundreds of Americans and Aussies in Aterau working in the oil and gas business. Who would have guessed? We had a beer and pizza and, back in the parking lot, took a final convoy picture and said our goodbyes.

Bill, Mike and I nestled into our tiny Saxo and pointed it due south to Uzbekistan. The rest of our tiny convoy pulled out their maps and began plotting a route East and then North towards Russia. It was a sad goodbye, and it was lonely to be a solo rally car.