Ferry from Turkmenbashi to Baku Part 2

Having returned to the ferry terminal after our morning attempt failed and we had decided to enjoy the day with a nice swim, we were dismayed when we arrived and found the parking lot empty. The woman who had talked to us earlier smiled and gave us some advice: “Put your name on the list.” This was the first real information we’d received the whole trip about the ferry. What was this mysterious list?

The list turned out to be a log of people waiting in the other room. When a cargo ship has extra room and weight they allow a few passengers to make passage across the Caspian on their ship for a small fee. If a ship is transporting oil, no passengers are allowed. Outside the ferry terminal there were two cargo ships busily loading whole wooden train containers into their belly’s. We added ourselves to the list as numbers 15 and 16, and then discovered there were only 15 seats available.

We waited a while. No one knows anything because there is nothing to know. We had only to wait for the cargo to be loaded, and for a wind storm to pass before the captains of both ships would release how much space they had available. After eleven tickets were given out, the widow was closed. It reopened a bit later once the Captain’s lists arrived. There were plenty of seats for everyone waiting! We got our coupon and ran around to the various windows to de-register and then customs and baggage search before being ushered out to a ship. With a tear-filled goodbye to the drive and translator, we went through customs without incident and headed towards the ship.

The cargo ship contained several railway cars and a hull full of large metal boxes. We reluctantly gave up our passports to the Captain, as well as $100 each, and then followed a man in a T-shirt that went down to his knees up a rickety metal latter into the belly of the vessel. We climbed several sets of stairs that were more like metal ladders before we emerged into a narrow hallway covered in plastic painted to look like wood grain. He led us to a cabin and walked off without even a head nod. We smiled and waved cheerily, determined to make friends on the boat, but he wasn’t interested. Sailors really are tough as nails. 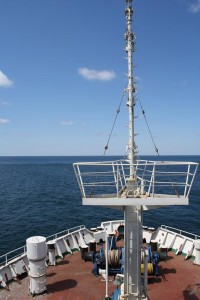 Top of the Aidemik on the Caspian Sea Ferry

Our cabin was atrocious, but since we were expecting the worst we found it only amusing and entirely hilarious. The room had two bunks covered in blankets that looked like they were hand-woven in the 1500s. A desk along one wall was so smashed it made the room look like an abandoned cabin in the woods. Two wall cabinets with broken hooks and punched in doors held dirty linens and a sofa cushion (there is no couch on board) and then there was the bathroom, which deserves its own paragraph:

You have to kick open the door while you turn the poo-covered door knob and throw your shoulder into the upper section in order to get it to budge. Once the door is open, it takes every ounce of focus not to slam it shut again. A sink to the left inside the door is filled with bug carcasses. The shower head is rusted into modern art, while the basin that collects water from the shower now houses a collection of spider webs and urine stains. The toilet seat was down, thankfully, but Mike opened it for inspection. It contained several petrified turds. The piping was nonexistent and any water (if there was running water that is) would have to drain via a hole in the center of the tiny room that was rusted by urine. There was no light in the room, and only flies (of which there were dozens) and mysterious white spiders would dare to be in the room. The door, needless to say, was thus always firmly shut. 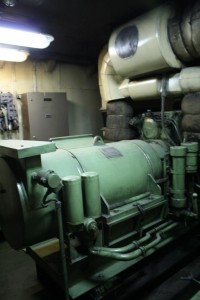 We set sail around 10pm, and I was soundly asleep so did not notice until morning that we had even moved. Out on the deck a strange collection of flying insects had swarmed the boat, and were now clinging onto the sides for dear life. Literally millions of the bugs would swarm any human unlucky enough to be required to walk down an exterior hallway. In the afternoon I ventured onto the deck to take pictures of the ship and search for the source of a strange and ever-constant banging noise. The bugs swarmed so ferociously that I could not inhale without sucking several in through my nostrils. The banging turned out to be the entire non-essential crew on the lower deck chiseling rust off of the main desk. They used crowbars to chisel while the bugs swarmed around them. I watched for several minutes until too many bugs blocked my vision and were so infesting my clothes that I was itching all over. I returned to my now luxurious-seeming cabin to type about the adventures on the ferry thus far, and to read. It was not until late afternoon that I returned on deck to inspect the bug situation and to find the source of an endless supply of Latin music. Young crewmen were lifting weights to the sounds of Shakira, some wrestling each other while others danced or lifted. It was a happy looking crew, despite the bugs, lack of food, lack of bathroom and crappy sleeping quarters. Strangely, everyone on board was happy to be there, ourselves included. We had tried so hard, and focused so much to get aboard a ship to Baku, that now we were thrilled to be in the petrified shit room covered in bugs and without running water or available food. Utopia couldn’t be sweeter than the feelings we had on board the ferry of euphoria and happiness.

One thought on “Ferry from Turkmenbashi to Baku Part 2”