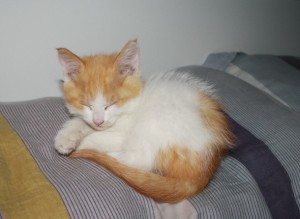 In December, Mike bought me a kitten for Christmas. It died shortly after of FPV. We named him Nixon, after Mike’s favorite president. That is Nixon in the image (left).

The vet who checked the kitten for us offered to find us another cat later down the line. In January, we adopted a stray Beijing street cat that the vet’s assistants had been feeding behind the building. She was healthy, about a year old, and in need of a home. So, we took her. She cried and ate a lot the first week, and by the second week she was plump and gorged. By the third week she continued to grow so fat that when we took her in for her check up the vet told us to lay off the food. Below is a picture of Tolkuchka, which is what we named her. Tolkuchka is the name of the famous push push bazaar in Turkmenistan.

Another month passed but she continued to balloon up and eventually we started to wonder if there was something else at work besides an insatiable cat. Sure enough, a few weeks later we took her to 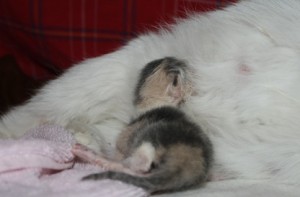 February 23rd rolls around and out pop seven kittens. The first one was a beautiful gray, black and white calico with tiny ears. You can see her in the image (left). We named her Kuntakitty. Nothing happened for several hours and then out

popped a second, this was an entirely orange ball of fur with giant ears. A few hours later in rapid succession five more orange kittens were born. Sadly, one died immediately and we buried him under a tree in our hutong courtyard. The remaining six kittens were healthy, large and feeding regularly. You can see them to the right, sleeping a few hours after birth.

For the first three weeks the kittens didn’t do much but sleep and feed. In our tiny livingroom, we put a blanket over the coffee table and stuffed the area under it with blankets and hot water pouches to give the animals warmth in the cold hutong.

In the image below they are twelve days old and still sleeping in the nest under the coffee table. They stayed there for about the first month. Eventually, they outgrew the tiny living room and we moved them into the bedroom, which had fewer things for them to fall off of and eat. 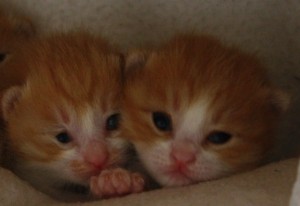 They grew well for a while, in the image below they are one month old. 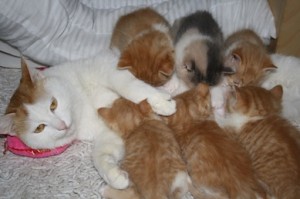 In the image below they are two months old. About two weeks after the picture below we noticed two of the kittens had stopped eating dry food, feeding and playing. They generally didn’t do a lot. The two sick kittens included the gray one (Kuntakitty) and the runt (Tiny Bubbles). In the image above they are the two on the top right. 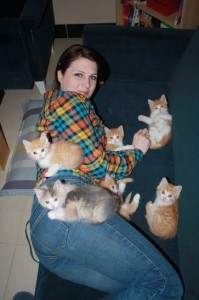 I took them into the vet and they did a blood test that revealed the two kittens had VPF, the same virus that killed Nixon a few months earlier. This was a shock because we sprayed down our entire home with virus killer, we kept all the kittens in a clean room, and we were extremely careful about contact with the kittens. Apparently the virus is easily spread with minimal contact so anyone who was outside and came into the kitten room could have spread the disease.

The vet instantly put the two kittens on a regiment of treatment designed to help their bodies fight of the virus. They have to be taken to the vet every day for three hours a day for an IV drip of nutrients and vitamins, an anti-coagulate shot, antibiotic, anti-virus, enzyme booster, medicine to keep them from vomiting, shots to keep them energetic, shots to increase appetite… the list goes on. These two kittens are poked and prodded for three hours a day and then the rest of the time they sleep on heated pillows and try to fight of the sickness. Today is their fourth treatment and another round of blood work to see how they are progressing and if their white blood cell count is up. 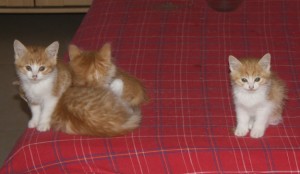 Just a note on costs. If this were anywhere else but China this would be impossible for us to do, but as it is we spend about $30 US a day on this treatment and the vets are great. They are friendly, care about the animals and do their best to keep them comfortable and healthy.

In the image (right) you see some of the kittens a few days ago. Most of these kittens have been adopted. We put up a post on The Beijinger and had a lot of happy responses. A Japanese woman and her French husband took the kitten we called Derp. They were so adorable with him. A British woman and her boyfriend took a girl and boy kitten home the following day. The long-haired beast we call Gremlin is still with us. And Kuntakitty (which was renamed Pattie by the German girl who will adopt her) and Tiny Bubbles (the runt) are still at the house with Tolkuchka. So, we still have four at home. Two healthy and two sick ones. People are interested in adopting Gremlin and Tiny Bubbles, so once they are ready to leave they’ll be out the door as well, and of course our happy German can’t wait to have Pattie/Kuntakitty.

This has been a hard five months of cat problems, and I never imagined there could be so many problems. We’ll update you later with the kitty news, but for now– this is what we’ve been up to for the past five months!

You can see more pictures of the kittens in the photo album.