A friend sent me this photo recently and as many of you know, this is an issue we’re pretty passionate about. There is crap public transportation in America, and yet we pioneered using the railway to link our two beautiful coasts. Apparently we haven’t updated our trains since they were first rolled out on the tracks. It’s disgusting. Every time I take Amtrak in the states I feel dirty, but the trains are basically the only way to get from place to place without flying or owning a car. Why do they have to be so horrible? 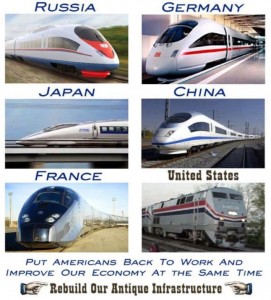 That Russia has super sweet trains and we don’t is a bit shocking. But even France can get it together. Wow. Low blow. China and Japan are at the forefront of technology with trains and while China has suffered a devastating crash on it’s high-speed train, that was ruled human error and everyone is moving on (with trepidation). Japan’s trains are one of the only ways to get around the country, which is super cool.

Imagine how much more time you’d have to play angry birds if you didn’t have to drive? You could just plop down in a seat and read or work on your laptop or finally figure out how 90% of the iPad works. Driving a car is fun, and necessary if you live out in the countryside in the USA, but for most people traveling form say New York to DC should involve sitting on a nice, clean, high-speed train for an hour or two while perfecting your aim at digital paper toss.

In our travels around this pretty blueberry planet we’ve only ever seen one train as horrible and unmentionable as an Amtrak train– and that was in Kazakhstan where we witnessed cops climb on board, take off his cap and pass it around the cabin as all the passengers filled it up with cash. When we got to our destination we saw people un-tape bags of ______ from their chests and clamber down the ancient stairs. That was horrible. HOWEVER, on one Amtrak trip a lady asked me to watch her screaming baby while she went to the bathroom. An hour later the thing still howled and screamed and the lady wasn’t back. The cabin attendant finally found her in the bathroom with a needle in her arm. Not that different, really. And yet the trains in Slovakia were awesome, clean, sleek and super shiny and no one O.D.-ed in the bathroom or had ____ taped to their bellies.

I’m all for spending a few of my tax dollars on better, faster, less embarrassing trains. And while we’re at it (don’t get me started on this) better roads. The German autobahn doesn’t have potholes filled with black tar all over the place. Why can’t we build a decent road? AGHHHH!!!!!!

One thought on “Fix Our Trains NOW!”