Foods You Recognize, Uses For Them That You Don’t

Beijing is a funny place. If you don’t have a sense of humor living here, you simply can’t survive. Some of the funniest things I’ve seen lately in the city involve food.

For example, did you know that the Oreos sold in Beijing have a different recipe than the ones sold in the USA? They are less sweet, and the dark brown cookie aspect doesn’t taste of chocolate but of wheat. This was done intentionally because the Chinese don’t like overly sweet baked goods. To me, however, they taste like burnt air. 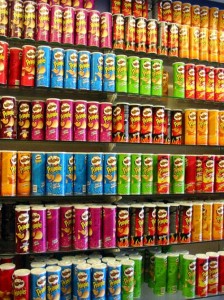 The funniest thing to do with odd food is to sample and then laugh about it. One of the things we constantly get a kick out of are the new varieties of Lays and Pringles chips on the market. The most disgusting was blueberry flavored, the least disgusting was kebab flavored. The oddest was potato flavored, leaving me wondering if the Pringles are made with rice here in China. Either way, they are gross.

Cheese isn’t really consumed in China. You’ll find most Chinese have never even tried it. The cow to human ratio here is so skewed towards humans that there simply arn’t enough utters to go around. Meanwhile, the only cheese at the market remains a Chinese brand of white singles slices.

Its very hard to find some of the most simple items imaginable. For example, a can opener. Since most Chinese get their vegetables at the little street markets, canned foods are simply not that popular. As a foreigner, canned foods were a primary source of nutrition back home and I had found a place to buy canned items in town (a place that mysteriously had no suggestions on how to open them). I imagine wealthy Chinese shopping in the expat food store, buying canned items and then going home and bashing the can against the counter or trying to twist off the top. 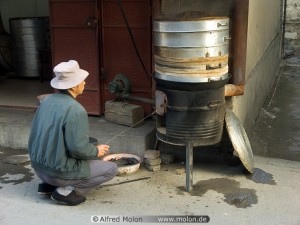 Chinese kitchens don’t have ovens. This means you can’t bake anything. In fact, most stove tops are gas, and the gas doesn’t go down very low since most Chinese cook in a wok, which means that trying to cook something with a Western recipe in an Eastern kitchen is like trying to ice skate while standing on your head. Its hard to do. I can testify as someone who has tried to bake a cake in the microwave at the importance of ovens for Westerners.

But cooking at home and shopping are not the only food related oddities you’ll encounter in China. Remember that post a while back about the frog in the soup in Shanghai? We come across things like this all the time. For example, a few days ago we took a friend to a popular burger joint in town called the Blue Frog. When he looked at the menu he wasn’t shocked to see a ‘blue frog burger.’ We all took this as proof that he had been in Asia too long, it was a branded burger, not an actual blue colored frog as substitute for beef.

5 thoughts on “Foods You Recognize, Uses For Them That You Don’t”