Believe it or not, our USA Lonely Planet boasts of Utah as being a well kept secret full of adventure, outdoor activities and wonton awesomeness. We’re wondering what Cool-Aid these writers were drinking. The long stretch of dull we drove through was like driving across a giant block or dirty butter. The guide book did mention some amazing rock structures to the south, but if you have to drive across more of the same dirty butter to get there, we weren’t interested. Perhaps that’s why it is such a well kept secret. Everyone turns around and gives up before getting to this mysterious awesome part. 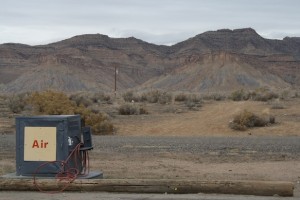 Salt Lake City was a place I was interested in seeing. Having watched the Big Love series about the LDS church, polygamy and Bill Paxton, I felt I had invested a sizable chunk of time in seeing parts of a city I otherwise had no interest in. The Temples sounded unique and worthy of exploration. Sadly, our time in SLC was limited to a quick drive through town. We saw the temple, the streets paved with … pavement, and not a lot more. It was largely uninspired. More depressingly, the outskirts (which sprawled for hours!) were run down and beat up. I was reminded of the folks in the show who were outcast from the community. Thus, we pointed our hood away from the state and its mysterious, hard-to-locate awesomeness and headed North by Northwest.

Idaho can be quite beautiful in parts, and I spent a lot of time there as a youth with my lovely grandparents. But they lived in the hills and valleys—absolutely stunning. We drove through what seemed like one continuous potato field covered in a depressing layer of recession. 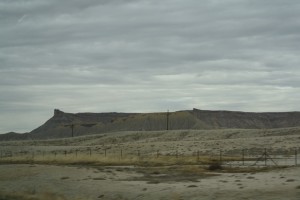 Our intention of driving from Colorado to Washington without stopping was foiled by exhaustion. We stopped in Idaho at a hotel that would have given us all hepatitis had we not slept on our own blankets. In the morning, we discovered a junk yard was the backyard of the lovely hotel. The front yard was the highway. What a charming spot for a center of hospitality. Onwards we went. And from here on out the geography began to get ever more beautiful.

Every time I drive through a chunk of land that looks like the bottom of a dirty work shoe I’m rubbed by a sense of curiosity I can’t shake. I wonder if the folks who settled there were part of the original pilgrims who headed west in search of land, gold or just adventure. I wonder if they know that they gave up in the desert when the oasis was just a mountain range away. IF their ancestors had kept trudging, they’d be in the grace of the forests, hills, rivers and lakes instead of a trailer on the edge of nothing. I thought about this a lot driving through Utah, Idaho and Oklahoma. If they had but continued on, they’d be on the coast! Instead they risked everything, left the comfort of the East Coast, and all to end up in a wasteland. Or, perhaps they find the wasteland beautiful and deplore the forests and the rivers. I’ll never know. 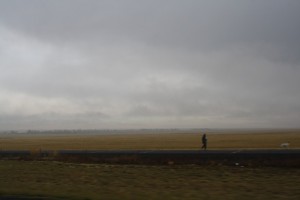