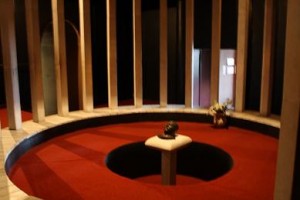 Gori is a relatively small town nestled against a weak river with a small fortress resting on a hill in the center of town. Once the fortress served to protect the residents, now it is a minor attraction; the primary attraction in town is the Stalin Museum, built next to the remains of the home where Stalin’s mother and father lived with him for the first several years of his life.
We jumped off the bus from Tbilisi in downtown Gori, and went about finding a place to leave our bags so we could explore the town. Hotel costs were ridiculously high, but we knew of a home-stay that had bad reviews, but at least two beds available. We found the home-stay and dropped our belongings before searching for food.

We found one of the most amazing restaurants on the planet, I’m sure you’d agree. It was run by several men who also owned the place. Inside there were no decorations, just a bar with a marble counter-top and several tables you could stand around. The menu was only in Russian, but as one of the owners spoke a bit of English, he helped us order. “Plate of meat or plate of hotdog meat, or plate of cow meat.” We ordered plat of meat and were shocked when he slapped down a metal plate full of pork ribs, perfectly cooked. We gulped these down with our “plate of bread” which was a whole loaf of wheat bread. The only thing to drink on the menu was beer, and he made sure our cups were never empty. There were no women in the place, and all the town’s men had gathered for their ‘plate of meat’ and beer, and were happily bunched in groups all around the room chatting. Everyone was happy and introduced themselves, and the owner called an English-speaking friend on the phone to talk to us about Gori. When it came time to leave (after much beer and meat) they refused all payment attempts and invited us to climb to the church with them in the morning.

In the morning, needless to say, we were unfit to climb to a church of any sort. We pulled ourselves out of bed with so much effort and found that the home-stay was of disgusting quality, with damp beds and dirty walls—easily the worst place we’ve ever slept. We cleaned up and then climbed up the hill to the top of the fortress to look around. Gori is a small city, but a quaint one, and the view from atop the castle was well worth the early-morning hangover climb. We had a quick breakfast on Stalin Ave before heading to the Stalin museum. A group of four Marines from the USA were ready for an English-guided tour, so we tagged along. We were rushed from spot to spot, and all of us exchanged glances when she skipped a whole room called “collectivization.” It was a mixed-bag of history and lore, but some of the items from his personal collection were interesting, and the well-preserved home his parents raised him in has since been cased in marble outside the museum for all to see. 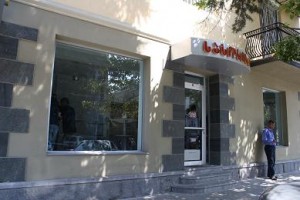 Having had enough of Stalin, we dropped by the “man bar” but our host from the night before was nowhere in sight. We waved at the patrons we recognized, and wondered if they ever left the restaurant at all. At the bus stop, we easily found the marshutka to Bjormi, and I fell asleep on the back bench of the van while a Georgian military kid in front of us played American music for our entertainment on his cell phone.

One thought on “Gori Stalin’s Birthplace”