Having a Baby in China- Vol. I

Having a baby in China as a westerner is an astonishing experience in every sense of the word. It’s unlike the process back home in almost every way. Granted, I’ve never given birth anywhere else– I’ve just heard stories from friends who have and a few brief visits to maternity wards to see friends. Still, the experience sound almost nothing alike.

Recap of Available Hospitals in Beijing:

There are two expat hospitals in town. Beijing United and AmCare. Both charge a small fortune, and cater almost exclusively to expats whose insurance will be carrying most of the financial burden. When I contacted the hospital for a price quote I nearly delivered the baby on the spot when I heard the shocking sum. Over 50,000rmb. AmCare was slightly more affordable at 40,00rmb.

Of the high-end Chinese hospitals, Mary’s Maternity and Beijing Union, we preferred the latter. Unfortunately, owing to the popularity of both the year of the dragon (2012) and the fortuitous nature of the 8th month (August) that hospital was fully booked for our due date, and had been for months. That means people reserved their beds before becoming pregnant. Essentially, that left us with only one option- Mary’s Maternity Hospital. So, that’s where we went. 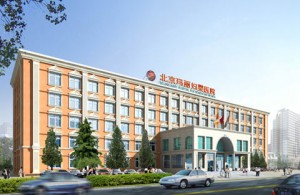 Mary’s had quite a mixed reputation. Some friends of ours swore by it (“they sent the baby a birthday card every year!”) while others lamented it as low quality and high price. At 30,000rmb, it was cheaper than the expat hospitals but more than the local hospitals. They claimed to have translators on staff who were also studying to be nurses who would be there every step of the way.

If you do a search for photos of the hospital you’ll find an amazing array of beautiful snapshots…. of other hospitals. Even the image above is a massively doctored photo of the actual shoddy building. I don’t think Mary’s understands what false advertising is. In the lobby of the real hospital is a collection of photos labelled “Mary’s Mothers and Infants Hospital” and then photos of luxury hospitals and hotel rooms. I asked dozens of times (mostly for the fun responses) if we could see those rooms and lobbies. They always looked confusedly at me and said, “but that isn’t here!” Silly me. Anyways, here is a photo of the actual pre-and-post delivery room. 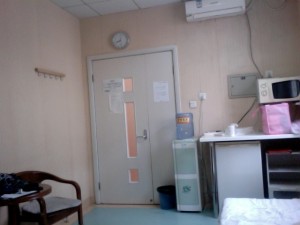 Our initial visit was a success. The hospital was relatively clean, and unlike most local hospitals there was both T.P and soap in the bathrooms. Our doctor was a 90-year-old communist with close-cropped hair and a smile that could re-freeze the ice caps. She was about 4 and a half feet tall and had a grip like a caged gorilla. She sized us up as morons and immediately advised us to go home to deliver the baby. She couldn’t be bothered. She had a point, but we had a business to run in Beijing and couldn’t leave, so we ruined her day by making her aware of our intention to stay in China for the birth. She sneered not so differently than a badger would when defending it’s burrow, and ushered us out of the room without a word. Apparently we were done for the day.

Our next few visits were not much of an improvement. They sometimes weighed me, sometimes didn’t and then looked shocked when there was a jump of a kilo or more in a month. They sometimes monitored my heart, sometimes didn’t. Everything was haphazard. They took blood and urine samples without fail, however. The results of all of these tests were not shared with us, and we were not entitled to them. When we asked the answer was always the same. “It’s nothing.” It wasn’t until the fifth month that I finally insisted on taking my records home and looking at them. It was then that I discovered any information about my pregnancy at all.

Around seven months, they informed me the baby wasn’t getting enough oxygen. Actually, the way they informed me was the translator typed a word into her iPhone and then showed it to me. “Cardiac Ischemia.”Knowing very little about cardiac health and illnesses I called Mike, who was at home, to look up a few details of my newly acquired ailment. He informed me it was a pretty serous thing. I was alone at the hospital all afternoon between oxygen intakes and EKGs and then fetal heart monitoring. The whole time, no one would tell me anything. I was ushered from room to room by an angry translator who reminded me it was her day off with every turn of the hallway. I was a wreck for a week worrying about this, emailing medical friends and researching online. In the western world information releases stress, in the East apparently the less you know the better. Without information, though, my mind assumed the worst.

They made me come to the hospital every other day for a half hour intake of oxygen, and then they’d do a fetal heart monitoring session to see if things were on the up and up. We either got the badger sneer or the frigid smile. No other information was provided, despite our pleas. We snatched up test results for a sneak peek, only to have them grabbed back and stuffed in our file like a top secret dossier of private information.

One thing about giving birth in China– you become your own doctor. Eventually I took home our records and spent days translating them. We used the test results and the internet to essentially play doctor ourselves. Did I have preeclampsia? We learned how to tell using the urine and blood pressure test results. Was I anemic? We learned how to read into the blood test for that. I spent hours studying how to read an ultrasound so I could check the cord blood, heart rate, amniotic fluid levels, PI and RI and so on. You’d be surprised how many textbooks are fully online these days. And so, after a few months we were experts in the fields of ultrasound interpretation and blood and urine analysis.We were not, however, any closer to understanding why our doctor was so cold, or why no one wanted to share anything with us. Seems it was harder to make a connection with anyone at the hospital than to learn all of these insanely complicated medical elements ourselves.

At 8.5 months they finally agreed to let us take an oxygen tank home with us rather than commute through the horrid Beijing pollution to get an intake at the hospital. This was a marked improvement for us, and lowered stress and anxiety (brought on by the very thought of dealing with the hospital) and increased oxygen without compromising it with exhaust fumes on the way to and fro. Here’s a photo of the little tank. 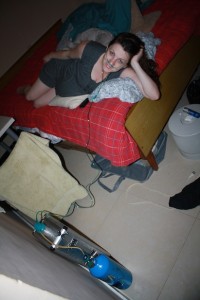 At nine months the baby was late, and the doctor insisted on waiting. There were no special test, but our regularly scheduled ultrasound showed the cord wrapped around the baby’s neck twice. We were informed of this nonchalantly by our mostly incompetent translator as she picked her lunch out of her gnarled teeth and strolled down the hallway ahead of us playing on her iPhone. “So you know, the cord is around it’s neck twice.” and then she walked off. It took about 45 minutes for us to make the doctor and the translator understand that we wanted more information. “We already explained it. The cord is there,” she would say. “Yes, but what does that imply?” I’d ask. “I explained it. The cord!” she’d yell. “Yes, but what does that mean for the baby, for our delivery?” Mike would try to interject. Eventually we left the hospital and, as always, did our own research online.

At this point, we’re frustrated, anxious and entirely fed up with the whole process at Mary’s. You’re not entitled to information about your health or your baby. Ultrasound techs lament showing you the screen. Translators don’t know medical terminology. Doctor’s are too concerned with their two-hour lunch break to offer you any real time or concern, and record keeping is shoddy. If we could do it again, we surely wouldn’t attend Mary’s, but then we’d likely head back home like our under-zealous doctor advised in the first place!

Tune in next week for Vol. II– Delivery and Postnatal Care at Mary’s