Having a Baby in China – Vol. II

Although the last post was overwhelmingly negative, the actual delivery and birth went quite well, and our baby is now safely tucked in our room.

We were concerned about a great many aspects of the pregnancy because of the poor prenatal care and the total lack of respect our doctor and nurses on the prenatal floor had for us, and for the process in general. Mary’s could use some major work in this area. But, the folks up on the fourth and fifth floors- delivery, operating room, maternity nurses, etc- are of another breed. 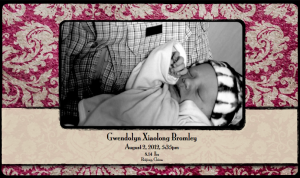 Upon arrive on the delivery floor we were greeted by a barrage of blue-clad nurses, some of whom spoke English quite well to our surprise. Our translator, who until this point had been distant and nonchalant, appeared eager to help and anxious. A nutritionist came in to inquire about my religious-food habits and the baby’s doctor came in to introduce herself. My own doctor came in to introduce herself as well. We all agreed to start the induction as progress was going too slowly, in the morning.

Morning rolled around and progress was non existent. We started an IV in the pre- delivery ward. The room was barren and toothpaste green, with two beds and a lot of hardware. A local lady was across the room chowing down on some unidentifiable piece of meat while watching her IV go down. They hooked me up and we watched the clock. A few hours later there was no progress. Then suddenly around noon the contractions started in every two minutes and extremely painfully so. I was doubled over, vomiting, coughing and panting. Nothing prepares you for that level of pain. They put me on oxygen and the nurse sat on the bed with me for the next four hours. Although the contractions became more frequent overall progress wasn’t occurring. Between 9am and 4pm I had dilated less than one centimeter. The translator came in with the doctor to tell me pain medication was not an option until I was dilated, but that in an epic catch 22, that simply wasn’t happening. They set a time limit- either dilate by 4am or they would insist on a C-section. It was nearing 5pm. I threw up a banana Popsicle (gross combo anyways!) and the doctor agreed that a C-section at this point was probably the best option considering the oxygen, vomiting and painful labor without progress. I was very disappointed in myself, but continuing in that state seems futile considering the slow dilation over the past eight hours.

So, we prepped for surgery. At this point things happened very quickly. Mike signed about two dozen release forms while they prepped me for the operating room. The next thing I knew (still in contractions every other minute) I was being wheeled down the hall, horrified pregnant women peeking out of doorways as I rolled past.

They blocked Mike at the doorway to the operating room, and lifted me onto a table under a giant white light. I was rolled onto my side and given an epidural. If you’ve never experienced this, it’s a unique feeling. The anesthesiologist (who spoke English nearly fluently) moved the needle around making my limbs feel like they were being electrocuted. It was so bizarre.

I was strapped to a cross-shaped table, my arms were tied down. They raised a screen so I wouldn’t see the incision. Sadly, in the rush the pain killers hadn’t yet reached the spot, so I felt the cut and howled into the oxygen mask. The nurses all jumped and the doctor’s eyes about fell our of her head. They waited a few minutes and tried again. I could still feel everything, but not as painfully. It was as if my stomach was unzipped. I could feel the cuts at different layers without experiencing overwhelming pain. This was pretty fascinating because my mind was 100% lucid. Probably not a great idea without a psychological pre screening.

They reached in and I could feel them holding her head. Then they pushed on my stomach from the outside to urge her out. I heard a doctor comment at how big she was. She didn’t make a sound and I started to panic, thinking the worst. My heart monitor was beeping so fast that the translator came over to hold my hand and she brushed my hair and whispered calming things. A few minutes later I heard the first baby cry and, of course, started crying too. The translator wiped away my tears and the nurses all gushed and there was sobbing all around and people coming by my face to say how pretty she was.

A few minutes later a nurse walked over with her, showed me her genitalia and announced “it’s a girl!” Remember, at this point we weren’t supposed to know. It was an odd first view of my baby, but she flipped her around and put her cheek up to my face so I could kiss her and see her from a more favorable angle. She really was adorable, though a bit covered in blood for my taste.

The nurse took the baby away and I heard them performing the Apgar in the background. The doctors and nurses spent over half an hour closing me back up. What had taken around five minutes to do, was 30 in the undoing. Still, an amazing medical feat and I’m always impressed at how quickly and professionally surgeons do their craft. The translator stayed by my side and held my hand the whole time. How was this the same person who didn’t care at all in pre- natal? She was saving the day. 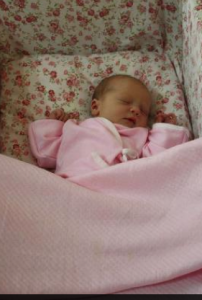 I was rolled out of the room and into the hallway where I saw my dad and brother. My dad’s flight had landed while I was in delivery, so he got to the hospital in time to wait outside the O.R with Mike and my mom and brother. It was such a nice sight to see them right away. They wheeled me to my room where I saw Mike holding the baby in the doorway. A few hands lifted me into bed and I think I slept. I didn’t hold the baby for several hours. I did hear my family in the room as the pain medication wore off. When it was gone, there wasn’t overwhelming pain but it was ever present. I fed the baby for the first time but still hadn’t seen her up close. It wouldn’t be until the next day that I got a good look at her and could hold her sitting up.

Well, that’s the story of how Gwendolyn joined the world. A bit of a rocky start and I’m sure she’ll hate bananas forever, but she came out a champion and a dragon.

Side note about her development. At exactly one day old, we laid her stomach down on the bed for a photo next to the clock at 5:35 (her birth hour) and she pushed herself up to look at the clock. She is amazingly strong! She can nearly sit up on her own, and she is holding her head up and looking around, pushing away from shoulders to view the other people in the room. She’s strong enough to push and pull items and, before I could feed her, she sucked the skin off her own hand. What a little beast! Cute beast though.