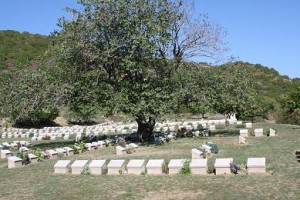 After a restful night, we awoke early to talk with the manager of the hostel about the package tours to Gallipoli and Troy. We were shocked at the ridiculous prices and decided to do the trips on our own, which was more our style. We took the public ferry bus from Chanonkale to the European bank and then negotiated with a taxi driver for a tour of several battle and grave sites for 45TL. Our first stop was the ANZAC museum, which contained a minimal amount of information but a ton of pictures and strange war artifacts like bullet casings that show another bullet hole in it, meaning two bullets collided in the air. That makes me imagine the air was just darkened with bullets all the time. We also saw shoes with the foot bone still in them, covered with barnacles, which made me sad because it means the person was never properly buried.

After the museum we went to see the beach cemetery, where John Simpson’s grave is. The architect of the cemeteries made interesting choices in where he places headstones. In the museum we noticed that most graves were haphazard, at best. So, the new architecture is simply symbolic. All of the sites were moving and tranquil; with 31 cemetery sites on the Gallipoli peninsula, there was a lot of sadness to go around. A jolly puppy jumped up to us at the last of the grave sites to cheer us up and put our spirits a bit more in order before we boarded the taxi back to the ferry. 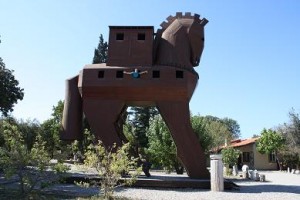 The next morning we added up how much money we had saved by going solo instead of with a tour, and decided to do the same thing again when seeing Troy. We checked out of the hostel and stored our bags there before catching a minibus to Troy for 4TL. Troy itself leaves much to the imagination. The ruins are in such an extreme state of disarray that it is hard to tell what used to be a wall, and what used to be just a pile of rocks outside the wall. Troy, also, was rebuilt so many times that there are ruins all over the place on top of each other, so that different eras are displayed somewhat like strata when you cut into the earth. The site is only partially excavated, and we’re wondering what they are waiting for.

The giant recreation of the Trojan horse is farcical, and only shows how much the town has been hyped above realism. Troy was a small citadel, with short walls, but ingenious placement. The wooden horse inside the ticket office is easily 30 feet tall, which would have been higher than the city walls, and its width would have exceeded that of the main city gate. A more accurate portrayal of the horse, the one from the movie Troy with Brad Pitt, was sitting in a nearby town.

After Troy, we caught a 4TL minibus back to town and then caught the first bus to Istanbul, which would put us in town by midnight.

One thought on “Homer’s Troy and Gallipoli”