We took the night train from Sofia, Bulgaria, to the Serbian capital, Belgrade. We arrived before the city had fully awakened at 6am and had to wait for the luggage storage room to open at the train station before we could stash our bags, change our Bulgarian currency into Serbian cash, and have a quaint, train station breakfast. It was raining when we arrived and, in Mike’s words, “this is exactly what I thought Eastern Europe would look like, rain and all!” 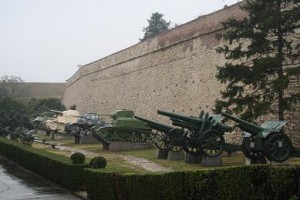 We set off towards Old Town with a general plan of just walking around until we spotted something of interest. The rain came down heavier and heavier until the town was shrouded in a grey haze. In old town we set our sights on the Kalemegdan Citadel, which has withstood some 115 battles over the past 2300 years. As a direct result, the city itself has been razed to the ground over 40 times. Today the interior of the citadel no longer houses terrified people, but a lovely park complete with modern art and extensive seating. It looks out over the junction of the Danube and Sava rivers, which explains why it was such a contested area in antiquity. We stumbled upon the citadel’s military museum and decided to venture inside.
The military museum was a bit confusing since nothing was in English, but it did beautifully outline the entire history of former Yugoslavia in metal recreations of armor, wooden ships and uniforms. After walking through the maze of artifacts for over an hour, we came across the “modern era” section which included bits of an American stealth fighter shot down in 1999, complete with the captured pilot’s uniform and tactical gear, as well as a dangerous amount of weaponry. Outside the museum there was a row of brightly painted tanks, exploded ordinance, and cannons. Some of the military equipment was apparently very rare, and extremely overused, giving the citadel a sad and somber feeling.

We walked back into Old Town to find the national museum, but it was under construction so we wandered around the downtown alleys looking at the elegant shops and busy cafes. Belgrade’s bohemian street, once known for its relaxing and low-key atmosphere, is now a busy cobblestone lane stocked full of tourist trap T-shirts, overpriced pubs and quaint but expensive eateries. We slipped across the cobblestones in the downpour and walked around Old Town for several hours before heading to the train station.

There was no train Sarajevo, so we found a bus that would leave a bit later in the night. We bought bus tickets for the night bus, something we swore we would stop doing since it was exhausting. Nevertheless, traveling by night means at least we are not spending money on accommodation for the day! We ate dinner in town and walked around in the rain snapping pictures of bombed-out buildings that had been left as monuments to former wars, and gazing at the beautiful architecture of the city. As the sky turned dark we returned to the bus station and were amazed to discover we would be on a double-decker bus to Sarajevo, and our seats were on the top, in the very front row!

One thought on “In Belgrade’s Rain”