In central Old Town there rests an ancient mosque (build in 1442) that has been repaired countless times and currently remains one of the largest active mosques in China. We decided to take a peek at this ancient relic of religion. 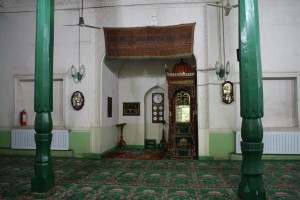 After walking around a bit in the late afternoon on our way to the mosque we encountered a very lively group of men and women huddled around a man selling tea. The various herbs and spices were laid out in small silver bowls surrounding the man’s feet and he chanted about the health benefits of each herb as he poured small amounts of each into newspaper. He mixed the herbs and flowers and spices together and sold a bag the size of a softball for 5Rmb. We watched, amazed, for about ten minutes before I was convinced (though I understand no Uyghur) of the health benefits. We bought a bag at once before setting off to the mosque.

The mosque itself is open to everyone, though there was not a single other woman inside. All foreigners have to pay 20Rmb to see inside, so we dished out some coin before we were allowed past the first set of guards. I was intimidated by the openness inside the mosque walls. The interior was a large garden with several praying rooms, all facing East. We walked to the most eastern wall where there was a rug from 1570 hanging on the wall and a small throne with a Koran and clocks that showed the time on every continent (for call to prayer). There were other items as well, but I’m not sure what they were for. It was five to five in the afternoon when a man with a heavy beard and dark eyes motioned to us and ushered us into the garden where a mass of people had gathered. Everyone looked at my uncovered head (I had forgotten my scarf) and at my legs, which were in pants and not the required skirt that is customary in Kashgarian women. I felt embarrassed, but I’m not sure why now that I look back. Several very old men approached me and looked at my eyes, hair and legs before walking past and talking quietly with their companions. I was too shy to take any pictures of a place of worship so Mike had been walking around with the camera. It was something I’ve always wanted to see and experience, but if you plan on doing likewise don’t forget your head wrap or else be prepared for stares!