This morning, after a bout of food poisoning which rendered us useless and hostel-bound yesterday, we decided to check out the famous Kashgar Sunday Market. According to our hostel owner/Kashgar guru the Sunday Market swells the city’s population by 50,000 people once a week. This morning, however, was a different story because of a freakishly random and intense rain storm which flooded part of the city and overturned potted plants and rattled the fragile wooden shutters.

We took the number 8 bus from the Old Town Mosque to the last stop on the line, which was 200m from the market…. across a giant puddle the size of one of the Great Lakes. After skirting the giant flooded road (effectively covering my black pants in yellowish-brown mud and clay) we found the Sunday market partially deserted. Apparently the rain and flooding was enough to scare away many an eager merchant. 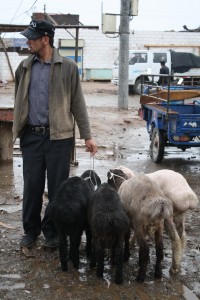 The folks who did turn up were mostly selling livestock. We found a certain breed of sheep quite foreign to us, and a bit bizarre. The sheep had human-looking butts, no joke. They were pink, plump, and hanging off of the body of the sheep where a tail should be, almost like baboon butts. Buyers were inspecting the sheep’s teeth, utters, and then lifting and groping the plumpness of the sheep’s hind quarters, which were substantial.

Walking past the bizarre-butt sheep I nearly fell when my foot slipped on something atop the mud and water. I looked down and gasped to discover I had stepped on a goat’s ear that was attached to a goat’s head, but that is where the attachments ended- there was simply a pile of goat heads on the ground and I had managed, somehow, to step on it.

After jumping goat-ear-foot first into a puddle to rinse my shoes of the goat’s blood I turned to find Mike peering through a gateway into a giant field of mud and poo that was sectioned off into stalls where, on one side people were selling baked goods and spices and on the other selling big-butt sheep, goats and cattle. Strangely enough, amid the swine flu, there was an entire truck loaded down with large, pink pigs. Swine flu paranoia is at its height in Kashgar, with one French resident of our hostel having been forcefully quarantined at the local hospital for having a fever. 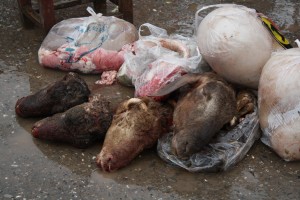 decided it was time to eat. Still a bit quasy from the food poisoning (and raw meat and heads lying about) we decided to head to the only western place in town, the Fubar Cafe. We arrived and instantly felt like we were back in the states, a pool table was the center piece of this establishment, with a wall of board games, a bar and several menus that made my mouth water. We pulled out the risk game where we proceeded to play 5 full games (we were there about five full hours as well, as a result) while eating pizza and hamburgers and drinking captain cokes. When you are away from your homeland’s food and feeling ill, there is nothing quite as satisfying as something recognizable.

We spent the rest of the evening and well into the night walking around Old Town bazaars and getting lost (intentionally) in the old back alleys. The Old Town section of Kashgar is fading quickly, with some recent reports indicating that a full 2/3rds of the area has been leveled in the last two weeks. There is destruction all around us and I honestly think this place will be gone within the next two years, if not sooner. It is one of the nicest and most lively neighborhoods I’ve ever seen, and that makes this a real shame.