Khiva was once renowned for its exotic and plentiful slave trade along the silk route. Slaves were captured in distant lands and marched across the harsh desert to Khiva, where they were put on display and sold. The slaves were usually from neighboring countries (in modern lingo) or from opposition regions, but generally from within Central Asia. As you enter the city from the east gate you are reminded of its ancient trade. The east gate is a long tunnel with prison cells on both sides that could hold up to seventy people per cell. To enter the market people had to pass through this tunnel of slaves, where sellers would shout out bargain deals on humans. Once in the east gate you were routed to the main bazaar area (although today there is a restaurant blocking the direct path) where you could buy vegetables and fruits, but also livestock and handicrafts.

If you were to enter the city from the west gate you might have a totally different experience in Khiva. This is where grand entrances are made, as this is the largest and most stately entryway into Khiva. The west gate enters near the Khiva Ark, which is where the ruling family lived. The multi-story complex they occupied boasts some of the most fascinating architecture in Central Asia. At the base of the Ark was the prison (of which we took a modern-day tour). The prisons in Khiva were never full for long, the reason being that the rulers employed professionals to do away with the prison’s inhabitants in ever more gruesome and creative ways. For example, a woman and man found to be in an unmarried relationship were killed, naturally, but here is the ‘Khiva catch’: The man is slowly hung from a platform in the city square while the woman is buried in the square up to her head and then slowly sawed in half while the dying man watched. In another twisted punishment, a woman who commits a crime is put in a bag full of cats (Mike thought they were snakes) and then the bag is hit with a bat. Finally, men are buried alive vertically, with their feet sticking up into the city square as a reminder. In Khiva, they were on the one strike system. 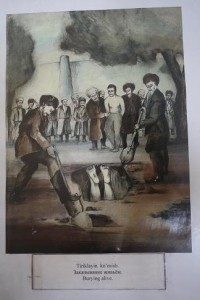 If you enter from the south gate, as we did, you will have a rather simple experience as that is where many locals chose to put their modest dwellings. Once inside the rather non-descript gate you will be greeted by local stray dogs and cats, and can peruse the alleys talking with the children. If you head west you’ll find the city’s graveyard, which is a cemetery that scales up the side of the city wall, the city’s oldest locally used mosques and medrassas are here. If you head east from the south gate you’ll find a long winding road that leads to more housing.

Finally, the north gate. In modern times this is the transportation hub, with buses to and from neighboring cities. There is little of interest other than a small restaurant outside the walls. In ancient times this gate served a different purpose: sanitation. The city was once fueled by a canal system bringing water in and sewage out: this was the out. There was also a pool outside the north gate where people could bathe and cleanse themselves as well as take a short-cut to the bazaar. This was the most lively and active gate for locals still living in the city and tourists trying to get out. From here you can also climb up on the twenty foot wall of the city and take a semi-circular tour of the city from above. 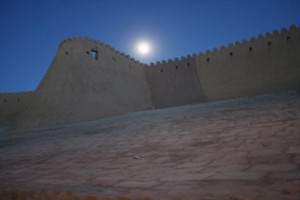 Khiva is a must-see on the silk road for its absurdities, its amazing architecture and the extreme dichotomy of the walled city. Owing much to its importance as a trade center until recent times, and then to the Soviet preservation of the city, Khiva has remained relatively unscathed by the 21st century (though you can find internet near the minaret by the west gate).