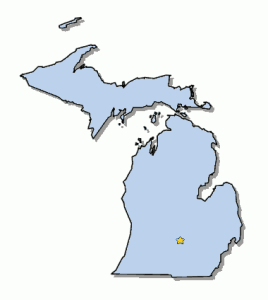 We’ve spent a few weeks in Michigan’s UP, the Upper Peninsula surrounded by great lakes. It is a beautiful, if not rugged landscape that grows tough, hardy people who are simultaneously hard as nails and yet as friendly as Home Improvement’s Wilson character. You can walk into a diner or bar in the UP and see some of the world’s most flannel-clad, bearded and grime covered men, only to have them pull out a chair for you or hold open the door with a tip of their baseball cap. It reminds me of a time I’ve never experienced, but only heard about. People leave their doors unlocked, and neighbors stop by almost daily to chat about the weather, the fishing conditions or whether or not you saw the deer out by the lake the previous evening.

Here is a story to demonstrate my point: The septic tank pump broke and alarms were going off in the cabin. We dug out the still water hole and replaced the pump. Meanwhile, neighbors from the left and right side of the cabin sauntered over to offer their help, advice and the use of their facilities until we solved the problem. Neighbors from even further down the road heard of the incident and drove by to see if they could help. It was like a sitcom scene where the whole town shows up in the yard to help one family. I had heard of such things in the past from my grandparents (or history books) but up in the UP that is just daily life. The community has taken us under their wing, given us local history lessons, books, food and fishing and hiking tips. It’s like we’re part of the family—two long lost prodigal grandchildren who suddenly returned from out of the woods. It’s a great feeling, and one we’ve never experienced anywhere we’ve traveled. All hail to simplicity! 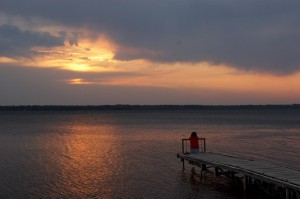 On an unrelated note, our time in the UP has yielded quite a few fish as we try our hands at acquiring our food from the wild. As it stands, I have caught several large bass while Mike seems to be a pro at walleye and pike. I learned to filet the fish, a task which involved (sadly) cutting it open and taking out the parts Americans don’t eat. It made me sad since we’ve seen folks in China dig into the organs and eyes, head, etc and yet we’re wasting those parts here in the US. I have no idea how to cook fish head, but when I’m back in China I’ll take a cooking lesson or two so I don’t have to toss out half the fish in the future. I have this theory that you shouldn’t eat meat if you couldn’t or wouldn’t go out and catch/kill it yourself and prepare it from the moment you capture it to the moment you eat it. I’m testing this long-held philosophy with the fish. So far, it involves petting the bass and apologizing to it, turning around while Mike stuns it, and then I’ll cut it open (while apologizing) and then filet and skin the meat parts. Then I apologize a bit more while I’m washing and storing the fish. I never considered myself a city girl, but I think these Yoopers (UP locals) would have a good laugh if they saw me petting and apologizing to my recently caught bass.

We just returned this evening from a small neighborhood gathering where some of the town’s most well known locals had us (and a few other cabins) over for desert. We chatted about many things, but no political or religious conversations emerged. We talked at great length, however, about the beaver population (did you know a beaver can live up to 80 years!) and told stories around the table of our travels abroad (everyone was extremely intelligent and well traveled). I have to say, it was a really amazing, simple and perfect evening with the Yoopers.

2 thoughts on “Life in a Simpler Time– Michigan’s U.P”