We stopped in Malaga, Spain, for a day to check out the town after hearing from other travelers that it was a “not-to-be-missed” destination. While this may be true for the more wealthy of travelers, it is not a hot-spot, so to speak, for backpackers. We have had several people comment that we absolutely need to give Malaga a second chance, so I hope we can make it back during our holidays to Spain 2014. With prices in Euros, and the Euro-dollar conversion not in the our favor, we found Malaga to be an exorbitantly expensive town full of cafés, corny souvenir shops and an excess of establishments that catered directly to those disembarking of luxury yachts and cruise ships. On the main drag, several men and women painted their bodies the color of silver or bronze and stood still in various positions, pretending to be monuments. It was interesting to see so many talented people, several musicians, dancers and people in costume. We watched the chaos on main street for a while before heading towards the Picasso museum and exhibit, which we found swamped with tour groups and costing $10 a person for entrance, so we continued to walk around town, simply enjoying the unparalleled architecture of the coastal area. 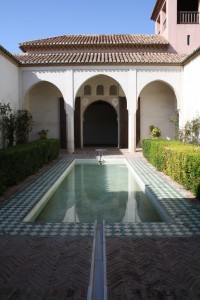 We happened upon old town by accident and in the heart of the back alleys, churches and pubs we found Malaga Citadel and castle, which we paid a few Euro to enter. The castle rests atop a hill overlooking the harbor, and offered astonishing views of the town’s center as well. It was built by the invading and conquering Muslims, whose architecture varies from that of the rest of the town, making it a striking piece of architecture. The interior of the castle was recently renovated and looked as if the entire thing has been built only last year. With pools of fresh water cascading down into tiny gutters that ran the length of the walkways, it was as if we were walking inside the Prince of Persia video game, which was set in a Persian castle.

In the harbor we could see a galley ship made of wood and hammered metal and ventured down after our climb through the citadel to have a closer look. It was indeed a very old wooden ship, complete with sails, lockable window hatches and tones of rope. It could have been right out of a pirate movie.

The town was pleasant enough, but expensive and ridiculously clean and organized. After having traveled through Central Asia and the Caucus, the cleanliness and costs of the city were shocking!

If your are looking for a cheap hotel in Malaga, I advise you to check on EasyToBook.com