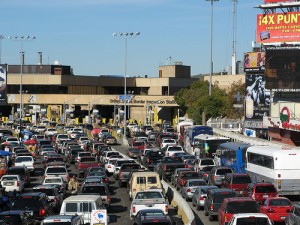 Having always loved Latin music, food, clothing and culture, my first trip to Mexico was dreamt about for years before it actually occurred. Last week I was able to live that dream when we crossed into Progreso from Texas. This was supposed to be a time of intense joy as a lifelong dream of visiting Mexico was finally achieved. However, the experience was sorely spoiled by the government on our side of the border. Here’s why:

I’ve crossed some 20 borders in my day, and not one of them has required me to pay for the privilege of exiting and re-entering the country. But, believe it or not, this is exactly what happens when you cross the land border between Texas and Mexico. In order to pass you must deposit a shiny quarter into the waiting mouth of a machine before it will grant passage into Mexico. Roughly 19,750 million American visit Mexico each year. This number times .25 = $4,937,500. That’s four million bucks the US government makes on American cross-border transportation. While I completely understand that the US-Mexico border needs funds in order to operate, I have a small problem understanding why this is the only border in the world that requires this payment. Side note: the Mexican side charges .35 cents to each person exiting the country for America. They make over 6 million a year.

Many people, Texans mostly, travel to Mexico to buy cheap goods. Cheaper liquor is one such item folks will traverse the borders in search of. While in Mexico we did what many other gringos around us were doing– we shopped, ate enchiladas, had a few margaritas and then bought a bottle of booze to carry across the border to America. While in 2009 the laws stipulated that each citizen could bring back a bottle a month, untaxed, something has changed. We were stopped by rude and rough border guards who demanded $1.25 per liter of liquor. There was no explanation, just a demanding voice, a gloved palm reaching through bars and a continued barking of the order to pay up. There was no willingness to explain, no literature on why the tax was suddenly applies to each bottle entering the country. Sigh.

I don’t want it to seem like the trip to Mexico wasn’t amazing—because it was! A small mariachi band played while we sat on a balcony overlooking the main street having margaritas, children rode their bikes up and down the main drag while adults sold a sundry of baskets, rugs and other items to passing tourists. The food was good, the people were friendly and not pushy, and despite being within spiting distance of the USA, the culture was unique to Mexico and very vibrant. Hotel Del Arco Los Cabos is a great place to stay while traveling through the Cabo San Lucas area.

4 thoughts on “Mexico: A gringo story”