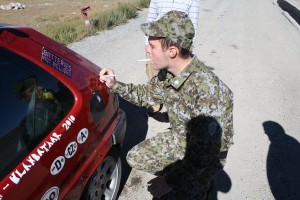 We waited in line with the Belfast Boys who had arrived at the Mongolian border before us until 9:00am. As the gates were ready to open, a local came up and told us we needed to move our cars out of the front of the line, go back 300 yards down the road, and register our passports with the authorities in the unmarked building down the way. We ignored them, since they had been trying to edge their cars around ours in line all night. Then, when a guard came up with the same instructions, we nearly lost it. “Why didn’t you tell us this at 5:00am, when we arrived?!” We soon found out why. The registration office opened at 9:00am, the gates opened at 9:00am, so no one in line had registered but the catch was Mongolians didn’t need to, nor did the Russians—so we were the only ones in line still jumping through hoops. We ran to the office then sat outside waiting until it officially ticked 9:01am. We quickly registered, jumped in the cars and… the guards motioned the Mongolians behind us through first. This wasn’t going to be an easy day, we could tell already.

We ended up through the gates by 10:00am. The Russians checked our passports, again the guards did not think the childish and somewhat chubby face on Mike’s passport picture was actually him—the dirty, bearded, thin man standing before them. It didn’t help that he was exhausted and looked older than he was. Eventually they let him through, but not after calling over every guard in the establishment to weigh in on their opinion. Bill and Lauren made it through easily and waited in the car while the Russians searched through the trunk. The head man was on site that morning, so the guards did a great job of looking without touching or taking, which made it the easiest Russian border crossing yet. Thanks, boss man!

We started driving through no-man’s land. This is usually a 1-3k empty area, a demilitarized zone agreed to by both parties. This no-man’s land was much more. We drove for ten minutes through barren hills covered and re-covered in barbed wire. The roads were the only passable part of the area so that nothing could drive across except on the roads. Guards (from which country, we don’t know) were laying more barbed wire, as if there were not enough deterrents already. A mid-way station revealed that we get a slip of paper showing we drove through legally. A friendly Russian and friendlier Mongolian both signed the car with our Sharpi marker, and waved us cheerily on.

A few minutes down the road we arrived at the Mongolian border. It consisted of a long line of cars waiting outside a fenced-in compound. This was odd since not that many cars had passed us at the Russian border, some of these cars came from elsewhere or from the day before. At 10:30 I met Betty, a Mongolian border guard who speaks decent English. We chatted for half an hour about her family, my family, and life in Mongolia. I introduced her to the team, and the Belfast boys. Meanwhile, a man had some up to the team and demanded money for driving the cars through the ‘disinfectant pool’ which was apparently a huge puddle of dirty, feces-filled water behind us. We refused to pay, as it was so ludicrous it was actually laughable but as Bill had showed him our car registration the man had grabbed it and run off into his office. He would return the registration for a small fee. Let me stop here. On the entire Mongol Rally we’ve avoided paying any bribes, any pay-outs or favors. This would be a first. I went into the office and slammed my hand on the desk and demanded it back, I ran after Betty and she advised us just to pay, as it was a small amount. I returned to the crap-pool and told the guard it made our car dirty and the fee was equal to the fee he demanded for dirtying our car. None of this worked and eventually Bill and Mike demanded I just pay the small bribe, so I pulled out one $USD and slammed it on the table in a small pile of food and fly gut residue. He was irate but I snatched the registration and walked away. So much for a bribe-free trip, and for a disinfectant wash that is probably corroding the bottom of the car?

We eventually made it through the gate Betty was guarding, and were instructed to park in front of the customs building. Once inside, you’ll never guess what happened. I’ll tell you, but I think you already know. They handed us a form called an ‘official health declaration’ which we filled out claiming we were healthy and sane. They wanted $5 USD to accept the form. You can’t process a visa without it and they wouldn’t accept it without the money. Yet another fake fee. The old woman smiled and knew she was going to get the money eventually. Yet again I yelled and smashed my hand on various desks. “Where here for charity, we raised money to help Mongolia, we’re donating our car to you to help raise more money for charity and yet you steal from us?” It was greeted with a lame, semi-toothless smile. She understood me.

Next in line was a lady who would stamp your visas and passport. Americans don’t need a visa for Mongolia (we donate huge sums of money in the form of aid) so we just got a stamp while the Brits and Irish had their visas checked. There was no fee here, which was a welcomed change, but we had one more window to go, so I wasn’t reforming my opinions about the Mongolian border guards just yet. 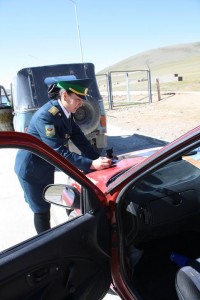 The final window was to register the car as being imported into Mongolia. There was a fee here… a $900.00 one! Since we had signed up with the rally we gave the Adventurists, (the body that organized the entire Mongol Rally) a deposit to pay this fee for us, and then when the car is sold they make that money back. However, this was the part that ended up costing us a bit of sanity and several days of our lives. Either the Adventurists refused to pay until they had already sold some of the cars in UlaanBataar, or the guards where holding out for a massive bribe. There was no way to know, even after calling the Adventurists we got the feeling we were being played by them as well. We were told to move our cars into the holding pen down the road. We checked this out. It was a cement platform with a cage around it. Two out houses 150yards away were the only facilities on hand. There was no water, no access to food in the compound, and nowhere to go. We pulled our cars into the pen, joining roughly twenty other cars that had been parked there for quite a while. Tents were assembled around the cars so that very little room was left. People walked around discussing what to do, some had their camp chairs out and were cooking breakfast, others played soccer against the fence or worked on their cars. Some people looked to have been there a long while. I walked around and asked what the deal was. Here was the raw deal we got in exchange for raising money for the Mongolians:

We were to wait in the pen until the border guards issued a form saying we could legally import the car into Mongolia. The guards claimed the Adventurists refused to pay the car import fee of $900.00, while the Adventurists insisted they were paying for 10 -20 cars a day (which would still leave several teams stranded for multiple days). There is no way to know the truth since it turned out the Adventurists were as corrupt as the guards. What happened over the next two days while we were held in this pen on the Steppe will shock you, so I’ve set it into another post entirely. Prepare yourselves to be shocked!

One thought on “Mongolia, We’ve Arrived…….almost”