Moving into a Hutong Home in Beijing

As many of you know, we were recently evicted from our apartment in Beijing. This stellar nightmare had a surprisingly happy ending when we recently signed a one-year lease on a hutong ping’an in Beijing. The misery of finding a new apartment in Beijing in the middle of the freezing winter time was hard enough, but looking for a specific thing while freezing makes it hard to stay focused. After a week and a half of searching for apartments I finally found exactly what I wanted—a hutong building. 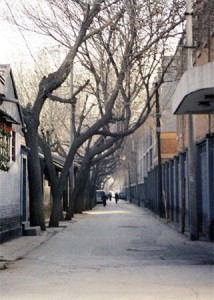 The apartment has a living room, master bedroom, kitchen, bathroom, dining room and extra guest bedroom and an office. In short, it is the biggest place I’ve ever rented. Additionally, it is in a hutong (a traditional-style courtyard village, where the entire community is in a 1sq kilometer block). One hutong home is called a ping’an. Since the communities expanded and grew, and more people moved in, they went from being the traditional courtyard surrounded by three large buildings, to a scattering of smaller homes and apartments at ground level, usually with a maze of alleys and passageways to smaller homes. Most hutong homes don’t have a bathroom, so public bathrooms are located around the hutong alleys. Ours has a bathroom.

I was so happy when I walked in and saw the ping’an that I knew it was where I wanted to live for the next month. A German fellow and his Chinese girlfriend were living there and the place was trashed! I mean, it was the most trashed home I’d ever seen. Piles of dirt and trash were strewn everywhere, clothes were piled on everything, furniture was piled on top of furniture and one whole room was stacked to the ceiling with unused appliances, furniture, trash and clothing. I had no idea how big some of the rooms were because of all the stuff! Nevertheless, the location was so great (near a bus stop, in a cultural hutong with great access to local pubs, cafes and shops) that I didn’t care about the mess. I made an offer on the spot. 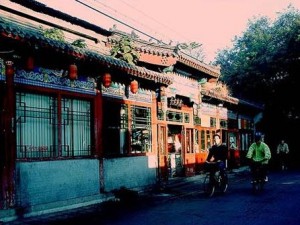 The following day the landlord agreed to my offer (via an agent) and I paid a half month agent fee and watched the landlord pay the other half, everything was upfront. The landlord arrived and we started examining the mess. She said if anything was broken to let her know and she’d fix it. I later found via testing everything that almost all appliances were kaput! As of yet, the landlord hasn’t returned to fix anything, but she assures us she will next week. I have no reason to doubt that.

We signed a lease and paid three months rent and one month deposit. We then learned that we would be paying about another 1,000RMB a month in heating as the heating system was antiquated and the ping’an inefficiently insulated. We were so happy about the home we didn’t care. We spent the next three days cleaning out the mess, and even had a cleaning crew come in to help. After the cleaning crew left the mess was more manageable. It will take quite a while to get the place up to where we want it, but with a bit of paint and decorations the ping’an will be amazing. We’re so happy with the new place, despite the heating costs and multitude of broken appliances, that we just can’t wait to have it totally ready and get settled in!

Pictures will be forthcoming once we get the basics dealt with and figure out where to put everything.

2 thoughts on “Moving into a Hutong Home in Beijing”