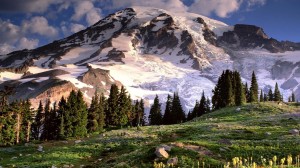 From my family’s home in Washington State you can see Mt. Rainier. It’s one of the most majestic sights on the West Coast at almost 14,500 feet, and is the highest mountain in the Cascade range (and in the continental, contiguous USA). More than 13,000 people a year climb the active volcano in Pierce County, making it one of the most visited alpine climbing destinations in the USA. But more importantly, the mountain is a feature in the background in Washington that takes everyone’s breath away on a daily basis…. well, on the days you can see through the rain. It is only 50 miles from Seattle, and visible from almost anywhere along the Western Washington area. In our small town, the mountain is so prominent in the background that it dwarfs every feature, even the massive evergreens that grow on almost every square inch of ground not taken by houses or roads. If you come into Washington via the north on Amtrak you get one of the areas most beautiful and stunning views– Mt. Rainier in the background as the train curves around the Puget Sound, with amazing views of the mountain reflecting off the water. Evergreen trees are everywhere, and when my train was pulling around one corner a bald eagle swept over the treeline for an afternoon fishing hunt. Yes, it is breathtaking.

Something strange about Mt. Rainier though, is that several people a year die climbing the mountain. Personally, I think this is because Americans climbing here don’t think of the mountain as exotic or dangerous because it is always in the background. Despite the cuteness of the mountain, and how prevalent it is in daily life here in Washington, you get several folks a year who go up the mountain without the right equipment, and without any training. Just because it is within driving distance of your house doesn’t make it safer than Kilimanjaro or K2. I mean, it’s a an active volcano covered in glaciers—what’s safe about that?   White outs are common on the mountain, and locals think the volcano could erupt at any time. Of the several deaths a year that are reported, most are attributed to avalanche, falls, rock and ice drops and hypothermia, which makes one of the most uninviting of destinations in Washington. Any serious climber would only tackle Mt. Rainier after successfully summiting several other smaller and more manageable mountains.

While it has always been a beautiful and meaningful part of the background, it is also a dangerous and extreme destination, and one I’m happy to visit again and again…albeit with the right equipment and usually, without leaving the paths.