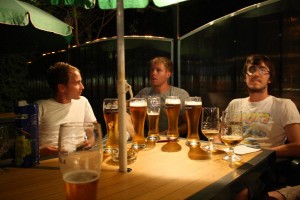 We rolled into Odessa quite late in the evening, having been held up at the border a bit longer than anticipated. Odessa came highly recommended by our Ukrainian friends in Minnesota, as well as by a friend whose father lives in the Crimea. Apparently during the cold war, Odessa was infamous for its webs of spies from both sides fighting for information and control. I was intrigued and when doing the initial route planning from the States we simply could not imagine going any other way but through Odessa.

We spent the first hour and a half driving around looking for a place to spend the night. We checked several hostels found on hostel world only to discover they were abandoned apartment complexes or simply a field or parking lot. Eventually we found a cheap hotel, but the advertised prices were off by a dozen Euro so we simply didn’t want to pay it. We asked at the hotel if we could park our cars in their protected parking area for a Euro, they said “sure!” so we positioned are cars near several other rally cars in the parking lot and decided to sleep in the cars to save money. But first, it was time to meet the other ralliers and find out what the latest gossip was.

We found a nearby pub and, not surprisingly, about twenty ralliers. They had been in a caravan of eight cars, which meant extremely slow progress. Nevertheless, they had beat us there, which doesn’t say a lot for our speed. We introduced ourselves and soon were engulfed in great conversations with amazing people from all over the world. 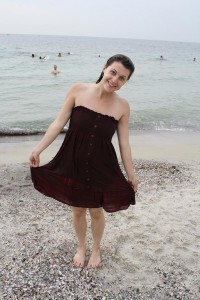 As the night wore on people began to drift off to find a place to sleep. We all moved our cars towards the water a bit and several teams through up their tents right by the side of the road. Mike and I slept in the Face Race car while Bill reclined in our ATC car. The Face Race crew have an instant pop-up tent so they threw that up near the road. Surprisingly, the police did not kick us out.

In the morning we all felt a bit gross having spent the night drinking and then sleeping in hot, disgusting-smelling cars. Mike, Bill and I walked down to the Black Sea to take a quick dip. I decided not to get in, but once we had walked all the way down the hill to the water I changed my mind and jumped in fully clothed. It was the closest thing to a shower in several days, and it was wonderful. We swam out a ways and just enjoyed the feeling of being cool for a change rather than dripping sweat. When we had been in long enough, we walked back to the cars and brushed our teeth and got cleaned up (as well as one can on the side of the road).

Everyone was milling about, so we made plans to head to the Steps of Odessa, a famous and beautiful area a bit north of our current position. We set off, the Face Race team in tow, and a new car joined our mini convoy, the Mongol Schumachers. We hit the steps within the hour, and found all manner of strange sights before us.

One man had a pet alligator and parrot, another had an owl and a monkey. For a few bucks you could play with the exotic creatures and have your picture taken. We opted against it for sanitation reasons, and bounded up the steps to do the happy dance from Rocky. Classic.

Back at the cars, I met an amazing gentlemen who is friends with Charlie Boreman (who rides with Ewan McGregor and co-wrote Long Way Round, and several other books). This guy was extremely interesting, and was going on yet another round-the-world bike trip. You never know who you’ll meet in strange places, but you can guarantee they will be much more interesting than the folks you meet back home.

We chatted with the bikers for a while before hitting the road. The goal was to make it to the Russian border, but as the goal was entirely unrealistic we thought we’d see how far we could get.

One thought on “Odessa, City of Intrigue and Limited Lodging”