Beijing 2008: On the Hunt for Olympic Tickets

I woke up at 6am, still on the train in my mini-bunk. I rubbed my eyes and, out of the corner of my sleepy vision, saw a Chinese local with a business suit on standing in front of Mike’s bed—watching him sleep. Somewhat startled and unsure of how to react, I simply watched the man silently. Eventually he bored of his voyeurism and wondered down the hall. I rolled over onto my stomach and washed my face with a napkin dampened in bottled water, then finished my book. When I was done I looked over and woke up Mike and told him about his on-board fan club.

We arrived in Beijing two hours behind schedule, and happily so. We were on our way to drop off our backpacks at Dale’s house. Dale recently took a ‘real’ job where he previously played a certain card game for income. His roommates all made money in a similar fashion. Needless to say, they lived in the penthouse of a downtown Beijing apartment, literally a two story (with two balconies and four bathrooms) suite. The fish tank in their entry way was larger than the walking area of our entire apartment.  At 11am, when we arrived, no one was awake—having suffered a serious night of drinking and playing the previous evening. We knocked to the sound of our own echo.

Eventually a very friendly hangover answered the door. We were later to learn his name was Ben. His girlfriend, Kristy, was sleeping soundly—unamused perhaps at our ‘early’ arrival. We set down our bags and hooked up Mike’s laptop to their Wi-Fi to search for tickets. The games, sadly, were sold out. We wondered if coming to the city on a whim with no plan was a bad idea….. and then we found online scalpers.

Online scalpers are a strange lot. They openly advertise aspirations for an illegal transfer of money for tickets—something the Chinese government fought earnestly against. Craigslist.com and other social selling spots were brimming with tickets to every possible event—though at a markup, of course.  We quickly found tickets online for a reasonable fare to the Cuba vs USA baseball quarterfinal game. They were RMB 300 each, not bad.

After calling the ticket holder on the craigslist posting we were advised to trek to a specific street corner near the subway, once at that street corner we were to call the ticket holder again and he would deliver further instructions. Now, we had been watching the hit TV show The Wire, and were amazed at the similarities between dealing drugs and dealing tickets. The phone rang as we stood at the street corner, dripping sweat and wonderment. We were to head into a nearby building and await further instructions. We did do, giddy at such a silly secretive illegal dance for something that was blatantly posted all over the web (with IP tags).

A kind, overweight Armenian man came out of a nearby elevator and spotted us on the phone. He marched over and made small talk—making sure we were in fact the saps who were overpaying for baseball. We assured him we were. He produced the tickets in a sealed envelope with Mike’s name written on it. Very subversive! I put the tickets, labeled with Mike’s name, into my purse. Meanwhile Mike reached for his wallet. The Armenian screamed and then looked around the lobby. “Not here!” and then he marched off down an unlit hallway. Confused, and somewhat too honest for our own good—we followed. In another lobby, with CCTV coverage of the whole area staring back at us as the Armenian put his palm out under Mike’s nose and looked around suspiciously. A real pro. 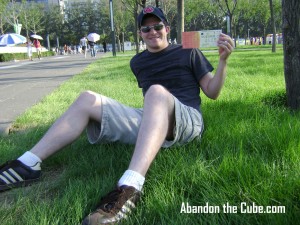 With the transaction complete we sat in the cab silently blinking away amusement at what had transpired. I pulled out the envelope with the tickets. Despite having watched The Wire, we had not checked the ‘purity’ of the goods. I starred at our seat assignments- the tickets were not for the same row or aisle, though they would be in the same general area. At least, we sighed, no stadiums had appeared full on TV—maybe we would be able to swap with someone?