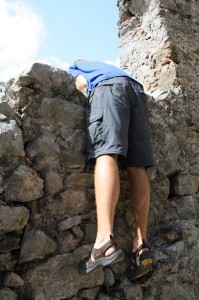 We experienced a taste of what hell must be like on the overnight bus from Cappadocia to Olympos. What was supposed to be an 11 hour ride turned into a 14 hour ordeal that resulted in three grumpy backpackers sitting on a pile of their bags looking out over the Mediterranean. We all jumped into the Sea, and after a few minutes of splashing around we were jolly again, though extremely tired.

Since it was my birthday the next day, Mike and Matt gave me my first present—a bottle of Capitan Morgan Black. We sat on the beach, with all of our bags, and sipped the sweet rum as we watched the waves crash against the rocky shore.
We checked into the Turkmen Backpacker’s Tree house complex along the main road to the Sea, and quickly decided to forego the much-needed nap and head back towards the beach, where we had seen ruins poking out of the jungle that was threatening to take over. We hiked for several hours through dense jungle, all of us in flip-flops and our swim suits, to discover random piles of unmarked ruins, small rooms and crypts and unmarked (or unfound) towers and Hellenistic walls. Some of the hike was vertical, requiring focus and strength, two things the sleepless night before had robbed us of. Nevertheless, we made it to the summit of a large hill, which was covered in ruins of a castle. We were alone in the jungle the entire day, and atop the summit we all felt like Indiana Jones.

We had spotted two water caves while swimming, but knew we could not make it out to see them via the Sea. While on the summit we found the opening of one of the caves and Matt and Mike took turns threatening to climb down a vine into the cave while I hiked around the cave to look for a practical way in. None was found and eventually our rumbling tummies had us turn back to the hostel.

The next morning we awoke early and after eating breakfast (and our breakfast beers) we jumped in the Ocean. Mike swam for the Sea Caves that were too far away to get to, and made it. Matt and I watched his progress and marveled. He disappeared into the waves for so long we got extremely worried and hiked back towards the castle hill to call down to him in the cave. When we got there, we heard no reply from poor Mike, so we stashed our bags in the thicket and proceeded to climb along the rock face that protected the castle from the Sea. It was a hard climb, and our hands and feet were cut on the sharp rocks, but we made it all the way to the cave and found no sign of Mike.

Matt headed back to see if he had passed us swimming back to shore while we had been climbing, I proceeded to climb as far down the rock face as possible to see more of the cave in case he was exploring inside. Suddenly, Mike’s head emerged from the water with a big smile and a startled wave when he saw me clinging to the side of the rock-face. After a bit of debate on whether or not I could climb back up, I took off my dress and glasses and, now in my swimsuit, jumped from the rocks into the Sea below!

The sea closed over me and I was shocked by the coldness of it. Matt dropped his shirt and jumped from the rocks into the sea next to us. We all swam into the cave and explored the various rocks and reefs. We swam to the next cave and did likewise before swimming back to the rocks where we had left our clothing. I was wearing the only goggles when I came up panting for air and pointing. A man in all black with a harpoon gun had just swam by not ten feet from us, his expression as shocked as ours at where we were running into someone else. I’m sure he wondered how we got out that far without scuba gear.

Mike swam back (he is like a fish in the water) and Matt and I climbed the rock face and hiked through the jungle back to the beach. We ate a quick lunch and then decided to hike into the jungle further down the beach to explore the ruins there. We scaled another hill and crawled down an old aqueduct, even spotting one rather large (4ft) snake slither into the thicket. The ruins were amazing, and open crypts dotted the hillside.

After dinner that evening we took my camera and decided to climb into the jungle to take night shots of the crypts. 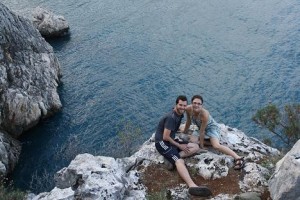 Mike had just finished reading Dracula, and made the experience more interesting by scaring the living hell out of us as we hiked into the deep woods. Noises you only hear in horror films engulfed us and we shivered a bit from the awkwardness of being around smooched crypts at night. Matt put my flashlight inside a crypt and I snapped a shot of it glowing from the inside out. Just then something ran at us from the woods and we all tensed. A scared cat pounced on the crypt and then ran into the woods as we all let out the breath we had been holding. It was time to go.

We sat on the beach looking out and chatting with a few locals who were doing likewise. It was a marvelous night, and a great couple of days, some of the best of my life!