Oradea and the First Gypsy 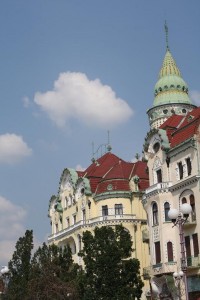 Gypsies, it turns out, do not have a very good reputation in Romania. Having driven from Budapest, we were exhausted by the time we reached the border. The scenery was beautiful, with mountains speckled throughout the landscape that our tiny car wound up and down and small speeds. Oradea was the first town across the border and we arrived on schedule around noon. Finding parking was easy, but the safety of our cars was definitely in question. The aforementioned gypsies flocked around the park nearby and asked for money from our small group at tedium. We took everything off the roof rack and put it into the car before setting off to view Oradea’s sights.

Two main plazas sit in central Oradea, one on either side of the river that bisects the town. We walked in the mid-day heat to the first and snapped a few pictures but because of the extreme temperatures no one was really in the mood to stare at more architecture. Several people were holding their stomachs in hunger while everyone else dashed into every passing quick-mart to buy a drink.  Hydration was key. We crept slowly across the river and halted for ice cream at a street-side vendor before exploring the opposing square and city center. For a small town on the border, Oradea is surprisingly beautiful and with a wealth of cafes, restaurants and bars. A long pedestrian street lay ahead, so we walked down it, enjoying the city and the rich atmosphere. 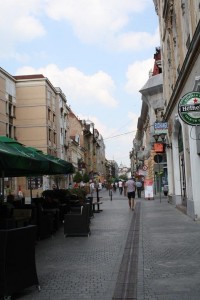 We had heard somewhere that there was a vegetarian restaurant in town that made celery schnitzel. When you hear a menu item like that you simply have to go check it out in person. Apparently it is the only vegetarian place in Romania, which made the allure all the greater. We spent quite a bit of time looking for it and finally discovered it was near our parked cars (which were still there, thankfully!). We sat inside, enjoying the air conditioning for several minutes while examining the menu. A curious thing happens in Eastern Europe, Central Asia and Asia. When a menu item runs out, they simply put an X in -front of  it. This menu was entirely composed of Xs, with only a few remaining items. We waited….and waited….and waited. Eventually we lost interest in waiting and decided to leave, having regained some humanity thanks to the air conditioners. We strolled across the street and had gyros for a fraction of the price.

Climbing back into the hot cars went against every natural survival instinct, but that’s exactly what we did. We hit the road going fast, anything to cool down the cars. In the back seat, Mike was dripping sweat as he looked out the window. Bill was wiping his face with a cloth and I was blinking rapidly to stop the burning heat from drying my eyes. We didn’t have far to go to reach our next destination, so we all set our jaws and forged ahead.