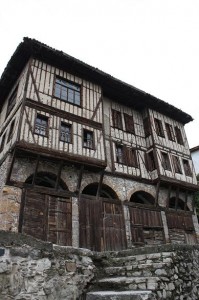 We arrived in Safranbolu, named after the plant Safron, around 8pm and instantly realized our bus driver, who was to deposit us in the downtown area, had overshot the landing point by 2k. He pushed us out the door and tossed us our bags as we coughed on exhaust. We shouldered our bags and instantly someone came up and pointed us in the right direction. 2k later, with 50lbs on our backs, we arrived in the right part of town—old town.

Safranbolu’s Old Town area is more than old, its ancient. Some wooden structures still standing are over 300 years old, roof to floor. The Ottoman style homes cover the entire floor of a valley, which is enclosed on all sides by sharp, rocky hills. The only way to enter Old Town is to hike up a hill and over it, which we did in the dark with our bags.

We arrived at our hostel by 9pm and were told it was full. The annual film festival was being held in town this week, so we were out of luck. They did happen to know of a friend who had a room available, so the proprietor picked up Mike’s bag (and nearly fainted at the effort) and marched us up one of the hills to a smaller hostel called the Efe Backpacker’s Pension. We deposited our bags in the dorm room and walked back into town to eat dinner at a small café we had spied on the way up the hill.

Back in the room we met Zoe, a British traveler on her way to South East Asia via Turkey and Iran. She regaled us with stories of meeting the city’s mayor that evening while strolling through town, and of having tea with the film festival’s chairwoman. Zoe was a lively and fun girl to be around, so we stayed up chatting until rather late. We had a few beers we bought at a store down the street, but the owner’s wife came running out onto the patio and told us not to drink there because it was against their religion. The beer we were drinking is called Efes, the Turkish local beer that the hostel was named after. In a daze of irony, we wondered why the named the hostel Efe, why they had a hostel at all if they were so devout, and why they had asked us to stop drinking when we were on the patio. Moreover, why do they sell beer in town if it isn’t to be consumed anywhere? I’m not one to be insensitive to anyone else’s beliefs, but on this count I find the no drinking in a hostel named after a beer just ridiculous. The situation was made all the more ironic because we were in a co-ed dorm, which should really be considered risky in Islam, when you think about it.

In the morning we walked around admiring the old Ottoman structures and snapping pictures of the town’s millions of cats. The town is small, and it took less than an hour to see the entire thing. We did something we never do, and bought a few cheesy souvenirs and a hand-woven shirt. In the evening we had a nice dinner with Zoe of Turkish meatballs and egg pizza. We went to the town’s only bar for a beer afterwards, and enjoyed the live music and atmosphere. On the way out the owner tried to charge us 5 TL for the nuts that had been on the table, but Mike and Zoe did their verbal punching and we ended up walking out paying what was right. I’m convinced that people in tourist towns like Safranbolu are not as good as elsewhere, since they are always trying to turn a quick buck on unwitting, young tourists.

At any rate, we slept in the dorm room again and in the morning notified the owner that we would be moving out. They panicked and pushed us from the breakfast table back into our room to pack up our bags. In a haze, they loaded our bags on our backs and gestured to the door. Apparently, once you pay, you might as well get the hell out because you are no good to them anymore. Three strikes for Safranbolu! Since we were thus evicted, we went to the bus station to get out of dodge, but found that there were no buses until 5pm. It was 11am. We took a minibus to the next town and from there got on a bus to Ankara by 1pm. Take that, crappy bus system of Safranbolu! We’re out of here!

One thought on “Ottoman Culture Survives in Safranbolu”