If you want to get PADI certified, you’ll have to find a certified instructor to teach you the basics of scuba diving. This isn’t easy when you live in the middle of nowhere, or in our case in Beijing. While we’re near the coast (5 hours by train) we’re not exactly in prime scuba diving country, nor is it easy to take a course of this type in a second language. Luckily for us, SinoScuba operates an English-language class led by Steven Schwankert, who is also the representative for South and East Asia in the renowned Explorer’s Club. When out in the wild, underwater, no where near a hospital you want to be with a coach you trust. We think that if the Explorer’s Club trusts him to represent the most populated are in the world, we can trust him to take us 18 meters down.

We’re in the middle of our PADA open water dive certification, the most basic certification one can get. It involves reading five chapters in a coursebook and taking short quizzes. The theory aspect of the class culminates in an exam administered by Steven. Since we’re only on chapter 4, we have one more chapter to go and the final exam which I’m confident we’ll ace (or at least pass). The coursework isn’t hard, but it is important.

Following this we’ll have two long confined water dives at the Blue Zoo in Beijing, an aquarium full of distractions that will simulate what it’s like being underwater in a lake or sea. I’ve already done one dive with Steven in the Blue Zoo, and survived despite the presence of some menacing looking sharks. Steven tells us that sharks are mostly a calm and beautiful creature and that only a few kinds of shark like human snacks. These, he says, are not at Blue Zoo.

After the confined dives we head to a submerged section of the Great Wall for our open water dives. According to Captain Jack, who did it in 2008, “Swimming along the wall you will come across a big hole in the wall; it was a gate to a tower! One at a time swim through this short corridor being very careful not to touch the wall or kick up the mud to come out the other side. You will encounter bricks from the great wall and some remaining building.Its amazing seeing this huge wall still standing even after being underwater for the last 30+ years which also defended against the enemy thousands of years prior!” (Check it out at the GoodDive Forum) 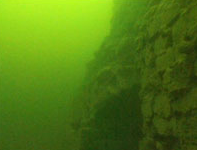 It’s interesting that the four of us doing this dive course together have such diverse interests with diving. I want to do ice diving, and swim beneath the ice in Lake Baikal. Steven has done this dive and listed it as one of the most intense and interesting. In order to be allowed to dive in Siberia, I need an advanced open water dive certification, ice diving certification, dry-suit certification and 30 logged dives. I’m a long way off. If you’re interested and in Beijing, get in touch. I’m forming a small group (so far I have one crazy Frenchman and myself interested in this dive in late 2012 or early 2013.) Check this out (http://www.abyssworld.com/diving-destination/sibir/lac-baikal/ )Mike is interested in the mixology aspect of diving. Different chemicals for different pressures, and that sort of thing. The others are daydreaming about diving in Bali and Thailand, which I confess would be easier and after this PADI course we’ll be certified to do. Yay. 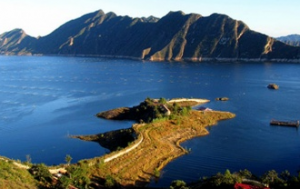 Underwall Section of the Great Wall