Philadelphia, Pennsylvania- Birthplace of the Constitution

Being surrounded by history isn’t something we’re new to. We’ve lived in China’s historic hutong alleys for the past few years. But being around America’s old history is new to us, and really cool. After our trip down Freedom Trail in Boston, we hit the road for Philadelphia without knowing what we’d see or do while in town. Turns out you need a few days to see all of Phily. 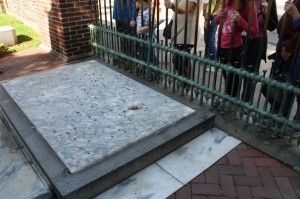 We started by checking out the Christ Church Cemetery, where Benjamin Franklin and a few other signers of the Declaration of Independence rest. This was a beautiful spot to call home for eternity. Aside form the throngs of tourists tossing coins on your headstone, that is.

From there we walked to the Liberty Bell. When I was a child I saw the bell in the middle of the commons, but now it is housed in a glass building surrounded by helpful signs explaining Philadelphia’s history and it’s position as the home of the American government. My favorite moment was when a Chinese man in line behind us commented in Mandarin on how inappropriate it was that there was a large poster of the Dali Lama making the peace sign in front of the Liberty Bell. Priceless. 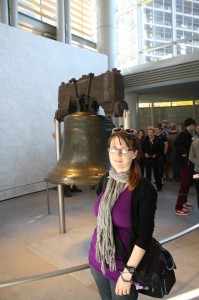 We joined one of the tours through Independence Hall. You can’t go in without being tied to a tour, luckily though they are free. A friendly tour guide explained the historical significance of the structures to our group of around thirty as we strolled through the main building. Independence Hall is home to the room where our brave forefathers drafted the constitution. This is cool because it was literally a group of regular guys deciding what kind of nation we’d become. The room wasn’t preserved well, but it has since been recreated to look like it did at the time. Despite it being October, it was hotter than hell in the room. This made me appreciate the hard work of the creators of the Constitution even more. I can’t imagine being so optimistic in such a hot room. 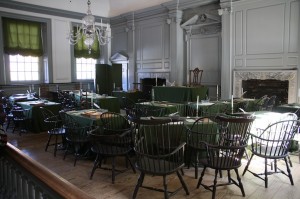 I had to stop on the lawn where our nation’s freedom was announced to change a dirty diaper. Afterwards we grabbed the customary Phil-cheese steak sandwich for an outrageous $7 and headed to the oldest continually dwelt-upon street in the USA. It’s quaint and adorable and normal people live there, despite the constant string of tourists. It reminded me of our home on Nanluoguxiang, in Beijing, right smack on a historical lane. 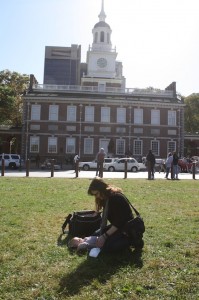 Philadelphia was a great city and, perhaps because it was such a beautiful day and a beautiful, history-rich city we were tempted to just stay put. But there was more to see….. 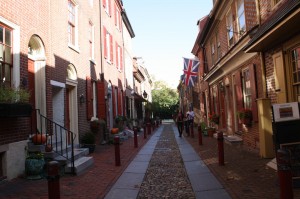 One thought on “Philadelphia, Pennsylvania- Birthplace of the Constitution”