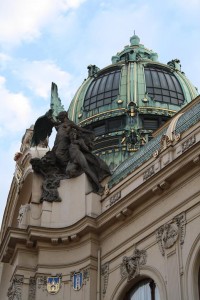 If you are going to get hopelessly lost driving in a foreign country where you don’t speak the language and can hardly read the signs, then Prague isn’t a bad option. We managed to join a small convoy heading into Prague from the Czech-Out Party and, after purchasing the required highway road-tax sticker we headed into the city. We also managed to lose the entire convoy and get ourselves so far off track that we found ourselves being laughed at by locals in the gas station who shook their heads and finally, in a great show of pity, showed us on the map how far off course we were.

We finally reached our destination—an elementary school that is used as a youth hostel in the summer to raise extra money. They had a secure car park (hence why we picked that hostel) and were central enough to be convenient for seeing the town. We unloaded our stuff into holding cages for security which prompted the even more valid question as to why an elementary school would have cages on hand. Afterward, we ran out to meet the folks who we lost in convoy. They never made it to the hostel, instead they pulled over at the first place they found for beer and the problem solved itself when it ended up being a hostel. 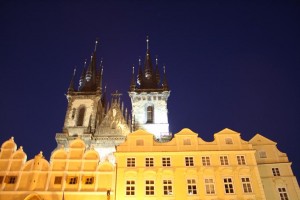 We went out to see Prague in the fading light and caught a tram to the center of town where amazing European architecture greeted us, and throngs of people milled about trying to sell various objects or lure our large group into their restaurants. Fireworks were going off in the background for several minutes so we watched them erupt over the steeples of the central cathedral. Dinner was a quiet affair for Mike and I; we had passed a Chinese restaurant that looked authentic so we ate there while the rest of the group had western food at a rather expensive restaurant on the square. We rejoined them for a beer and then walked around the square, under the arching towers and around fantastic structures. Finally, we caught the tram back to the hostel and slept well, our first real beds in a long time. I guess I don’t need to say how much the showers were needed and enjoyed after several days camping. 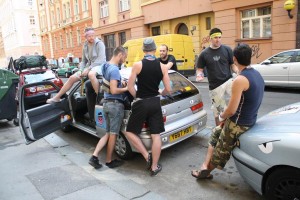 In the morning we packed up and ate breakfast at the hostel. Three young men in another rally car were packing up so we introduced ourselves. They turned out to be the Face Race team composed of Oly, Oli and King Rikki all from the UK. We discovered we were doing a similar route all the way until Kazakhstan so we decided to convoy. Before heading out, though, we had heard a rumor of a strange church composed of human bones. We decided to call the other convoy and caravan to the church.

One thought on “Prague, Czech Republic”