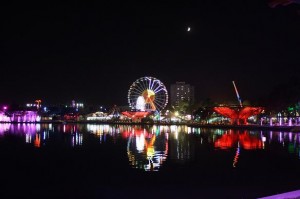 Having enjoyed our time in Safranbolu, but eager to get out of a town that was little more than a giant tourist trap complete with cliché souvenirs and overly friendly people trying to rip off any traveler who isn’t used to be wary every waking moment. It was the only town, thus far in Turkey, where people have been rude, tried to swindle us, and have generally left a bad taste in our mouth.

The bus to Ankara was small, and the people on board not particularly friendly. We settled in and put some comedy on the i-pod to liven up our moods. A little bit of laughter goes a long way, and soon we were revived and excited about Ankara.

We arrived in the city and were immediately shocked that it is the capital of Turkey. The city is dirty, expensive, and according to the Lonely Planet, dangerous. The city is divided into three main parts, the cheap part, the party part, and the diplomatic quarter. We went, obviously, to the cheap part, which is also where the Lonely Planet advises against going. The area was safe enough, and we checked into a hotel that smelled of cat urine and cigarette butts. This place makes Hotel California look good. The owner was an old man who had a gentle smile and was affectionately polite. We deposited our belongings in the room (30 TL because it has a bathroom you share with the whole hotel, and no showers at all) and half expected never to see our bags again. We walked around the nearby park, which has been restored and is now clean, nice and heavily guarded. We bought donar kebabs at a booth from a friendly-looking man who told us his brother is in Philadelphia. We had not eaten a real meal in a while, and he gave us a discount when we went to pay—a rare treat when someone loves American travelers, so we relished in it as we walked back through the park.

We spent the next several days in Ankara waiting for our new traveling companion, Matt, to arrive. We saw the Ataturk Mausoleaum and monuments, the Ankara Museum and Citadel and spent hours walking the back alleys and major arteries of Ulus, in Northern Ankara. It is a rather plain and bland city but an expensive one, and we were eager to move on to Cappadocia.

One thought on “Reaching the Capital, Ankara”