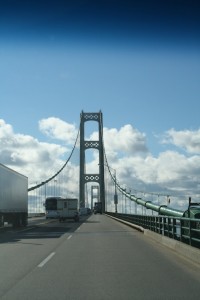 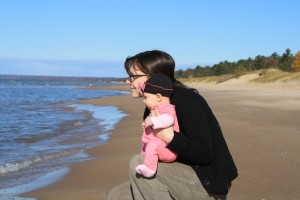 We drove along the length of the U.P heading east and stopped along Lake Michigan for fresh air and a wee leg stretch. Our tiny tot Gwen was eager to watch the waves and of course vomited profusely on herself when she was returned to her car seat.

The scenery looked almost identical to the mind-numbing drabness that is the American Midwest. Dead fields, dead trees and a sprinkling of depressing farm houses facing mega highways and signs for fireworks and casions. The bridge into Canada from Michigan boasts one of the single most 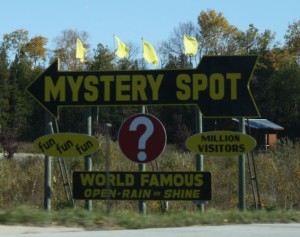 depressing views of a lake I’ve ever seen. Dozens of factories lined Lake St. Clare spewing foam, smoke and foul aromas into the air and sea. Not a good billboard for tourism to either area.

Entering Ontario was east. It’s always easier to get into Canada than out. Drivers in Canada must really fear the Mounties, because they don’t speed. It’s odd because I doubt a horse with a burly Canadian on it’s back could catch my car, especially the way I drive.

We learned that the Canadians are not the most creative town namers. We hit London, Paris, St. Thomas and Waterloo, and that’s just in the tiny peninsula of Ontario between Michigan and New York. And while I’m on the topic, Buffalo isn’t the most creative city name, either. Eh, Canada? 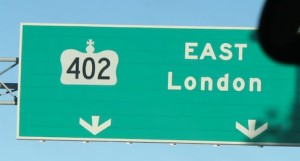 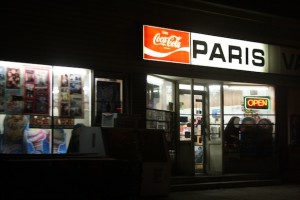 Some of the major highways in Canada close for construction at night. That means major detours for lost Americans whose GPS systems don’t have Canadian maps. Yup, that was us. We were detoured more than an hour out of the way, with ill-marked signs and of course following the world’s slowest truckers. Still, at least the detour wasn’t for a major accident, and that’s always a plus.

Niagra Falls is a unique city. It’s both the name of the falls and the city on the Canadian side, and it’s situated in a cozy and industrially convenient location. More on Niagra Falls later. For now, we leave you with this advice: Don’t travel in Canada at night. Who knows when the roads shut down for the evening.