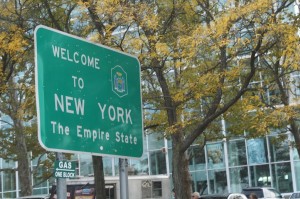 Leaving Niagra Falls, we headed into New York on the I-90. For those who don’t know New York, like we didn’t, I-90 is a toll road. We ended up paying thirteen dollars for the privilege of using the road. Once you’re on I-90 you’re somewhat trapped. They have stop-n-go centers along the route that have overpriced gas and food, but one teller confided in me that gas prices were higher by about 8 cents on the toll road.

I-90’s toll ends and the toll road turns into I-89. We got off the toll road with lighter wallets, and hit the 787N to the 7. This is where New York finally got interesting for us, but also where we exited New York in general. Coincidence?

Entering Vermont was a nice transition in terms of getting off the toll road and finally seeing some back roads and character. Farmhouses emerged out of the woodlands and those pastures gave way to mountains that bore small resorts, B&Bs and winding roads with stunning autumn views. Night fell as we entered the Green Mountain Forest, where around every precarious bend one finds another small shire of homes, small businesses and more stunning outlooks over fiery orange hills. 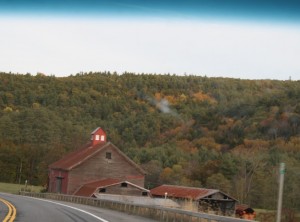 Eventually we hit the interstate on Vermont’s eastern border. This N-S highway boasts the worst drivers we’d encountered so far. Fair enough, they were distracted by stunning trees in transition, as were we. We followed I-91N until we saw exits for Littleton, New Hampshire. If you’re traveling along this route keep in mind that exits are not marked with what’s behind the trees so if you’re hungry you mind as well start swallowing your spit because it’s not easy to find the right exit for food. Here’s where a GPS would be of massive assistance. 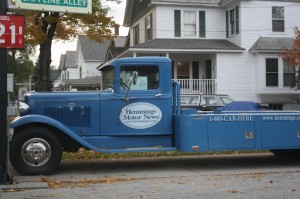 New Hampshire is apparently sales tax free. That’s pretty amazing considering you can purchase stuff there and save yourself about 6%. We bought diapers for our sweet baby, but didn’t take advantage of that deal for much else. We were now set to spend the next week with family outside of Littleton.

See more photos of the trip on the Photos page.