Yes, that was a pun because pot was legalized in Colorado a week before we dropped by. Did we partake? No we didn’t. But it’s still a funny song for a legal state!

What we did do in Colorado was see Colorado Springs, Denver and Boulder before cutting through the amazing, breath-taking Rockies to see Vail and then Grand Junction. Did we love Colorado? Does the Pope have a funny hat? Yes, he does. Yes, he does.

Colorado Springs was not spoken of highly by our Colorado friends. Perhaps that’s because the hills surrounding it look like just that, hills, when compared to the stunning peaks visible from Boulder. But we did enjoy the quaint downtown area and walked around until our buns froze before heading to Garden of the Gods. 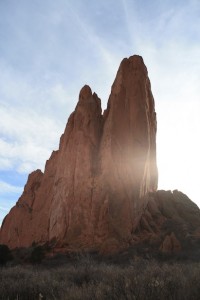 This amazing set of natural rock formations is quite stunning in winter, but I imagine it would be all the more bizarre in summer, surrounded by green trees that offset the orange of the rocks. We walked around for over an hour before our buns, again, froze. On to Denver.

We were on a mission in Denver to see the location of the next Matador Restaurant. The chain, which started in Seattle, will be opening a location in Denver and we had the inside scoop on it’s future home. After seeing this top secret spot we drove around downtown and, of course, strolled the lovely pedestrian street that bisects the city. Denver is stunning, but you can’t see the mountains from the city. Time to go look for a view of the mountains. 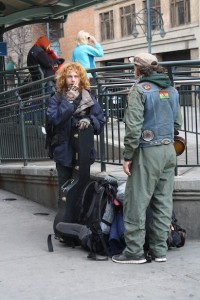 Boulder has it all. True, there are a lot of questionable folk milling about (have you ever played bum or hippie? You’ll lose in Boulder!). But the university brings in fresh cash and personalities galore. It’s a vegan’s paradise and the most important thing about Boulder is that you can see, smell and feel the mountains from the city. We walked around, drove around and then like a giant magnet the mountains pulled us Westward. 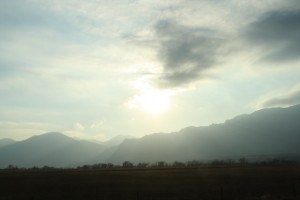 Cutting through the Rockies is like driving a car through a tunnel of awesome. We started our dissection around 4:00pm and by 6:00pm it was pitch dark in the mountains. You’d think that would ruin the drive, but instead the full moon lit an eerie and beautiful landscape of trees covered in snow and looming peaks. Pulling into Vail was like pulling onto the set of an expensive Hollywood Christmas tale. The lights were crisp and shed beams of wonder on the slopes, lodges and walkways. We strolled around Vail and munched on salads overlooking the ski slopes. I wished I could stay forever. But alas, only a Murdoch or a Trump could afford a random drop-by stay at a Vail lodge. 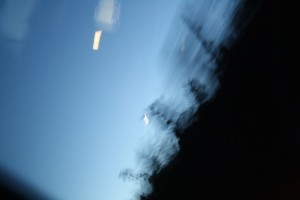 Grand Junction didn’t have much to offer and was a depressing port-a-potty of a town. Actually, we’ll never know if it was cool or not because after Vail anything would look like a cheap, swirling crap. Thus, we left Colorado on a Rocky Mountain high with a bit of nostalgia and, of course, some altitude sickness.