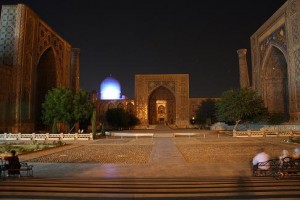 Our first day in Samarkand left us spell bound and awe-struck. There is no exaggerating this place, because exaggerations are impossible here. Our train from Tashkent left at 7:00:01 on the spot and arrived in Samarkand at exactly 10:30:19am. This was the shortest train ride we’d had on the trip so far, but the one that yielded the most drastic difference from departure to arrival. At the Samarkand station we easily found a local driver to take us to the B&B we picked online called Bahodir B&B, Bahodir himself met us at the door and, after a round of handshakes and bows, directed us to his nicest room for $20USD a day including breakfast and all the tea we could consume. Our room had a double bed and two single beds, a small wooden table, perhaps built by Jesus himself it is so old, and a tiled bathroom with a toilet and a sink which has an extension so you can hold out a rod and shower under it. It is much more than we expected and when we discovered the grape-vine shaded courtyard we were ecstatic about the find. The Lonely Planet does not recommend this place, but we beg to differ. For starters, it is located within spitting distance of the Registan, Samarkand’s biggest attraction and, according to locals, the only reason people come to Central Asia.

The Registan is a three building complex which was built between 1417 and 1660. The Ulugbek Medressa is the oldest of the three structures and was completed in 1420 as a school where Ulugbek himself was rumored to have taught mathematics. In 1636 the Emir Yalangtush completed the Lion Medressa, which is opposite Ulugbek’s and world renowned for the lion image on the front façade. In between these two is the Tilla-Karri Medressa completed in 1660 and famous for its gold-topped mosque.

We walked around the Registan in awe, not only because of the amazing architecture, creative and dazzling designs and unending variety, but because of when it was built and how well it has stood the test of time. A woman selling tickets told us it was 7,000 CYM a person to enter, but for locals the price is 600 CYM. We decided not to go in, as it was crowded and, we thought, a bit pricy. Instead, we strolled all around the complex. A guard came up to us and offered to take us to the summit of one of the mighty pillars if we returned at 6pm for 3000 CYM.

We left the Registan without entering, and decided to grab a bite with a view nearby. At a highly recommended eatery we had lamb kebab and bread. Afterwards we walked in 90 degree heat with no itinerary in mind. We strolled aimlessly past the art museum and down Tashkent Road, which ended up being the best place to be. We went into a mosque and then into a bazaar, afterwards we strolled down a large hill to the Shah-I-Zinda Mausoleums. This was the second most astonishing thing I’d seen on the entire trip, after the Registan that is. While the whole complex was rebuilt very controversially in 2005, I found it a delight to see. Here is why I do not disagree with their renovation. For starters, if things were not maintained or renovated they would deteriorate entirely, and though a history major and a history buff, I feel that preservation in the West means alienating a thing and trying to protect it from the natural decays caused by gravity and weather. Out here, history is still alive. The restorations done in 2005 are no different than repairs made to the Coliseum while it was still in use. Locals respect and adore their history and culture and want to keep it alive, lively and worthy of the fame it already has. The restoration artists retained before and after pictures of the complex and, for the most part, stayed true to the original designs, structure layout and floor plan. 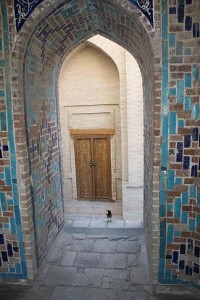 We walked up adobe stairs and into several mausoleums with markers for where the tombs are located. The exterior of the mausoleums are covered in intricate patterns using blue, teal and white tiles forming designs, flowers, and images of the sun. The interior was usually simple brick with an even more simple white marker bearing no script or indication of who lies beneath. Each mausoleum had its own collection of pigeons jealously guarding their territory. One would think that such beauty and intricacy would become dull over time, but this is not true. My eyes watered from strain, but could not look away. We went in every room, climbed every set of stairs and even walked behind every structure. The complex is set on a hillside where thousands of others are buried with simple marble markers overlooking the complex. Each tombstone of black shiny marble in the surrounding cemetery has an etched carving of the person beneath it wearing their finest clothing, and it is a bit eerie to walk around seeing faces you know are beneath your feet.

The complex houses one of the most religious places in Sunni Islam, the burial site of the Living King, the grave of Qusam ibn-Abbas, a cousin of Muhammad who supposedly brought Islam to the area in the 7th century. While there, we watched a local woman prostrate herself in his attached prayer hall. At 5:00pm we were still in the complex and heard the men chanting their prayers and watched them gather in the entry halls.
While we were advised to dress conservatively and for me to wear a head covering, once in the complex we discovered none of the locals cared. My head was uncovered and no one glared or gave strange sidelong glances. In fact, as we were leaving several Muslim women approached and asked if we would take a picture with them. Three women crowded around me and held my arms so tight they left white knuckle prints on my sun burnt skin. They were incredibly friendly. Unfortunately my camera is like Blade’s sword, only I know how to use it, so I could not get their friend to take a picture with my camera. Nevertheless, it is a happy memory I’ll retain just as vividly in my mind.

Back at the B&B we chatted with two men from Barcelona (the day after the Manchester United – Barcelona game on the 28th of May) who were riding their bikes around the world. They left four months ago and have eight more months before they return home. They were an interesting duo. As they were headed for China and we are headed, eventually, to Azerbaijan, we did a quick money transfer with them at the B&B, which proved to be much easier than getting rid of RMB anywhere else in Central Asia.