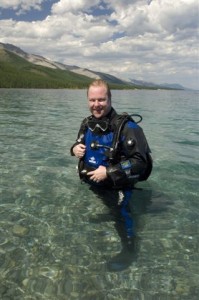 A lot of people don’t advise learning to scuba dive in a third world country. It can be a dangerous sport, and saving a few bucks isn’t worth the brain damage if your tank isn’t carrying the right mixture of gasses to sustain you underwater. And then, of course, a myriad of horrors could occur on the bottom that your guide or trainer may not be equipped to deal with. So, before you undertake a project like getting diver certified, make sure your instructor isn’t a wack job. That’s exactly what I did recently with my first every scuba dive with SinoScuba, a great organization in Beijing run by a guy named Steven (image right) from New Jersey.

We were diving in The Blue Zoo aquarium, in the shark tank. It was Shark Week in the USA, and that meant, for Steven, that people were once again thinking about sharks as the killers of the sea. “That’s just not true,” he told me. “Humans are the real killers of the sea, no sharks.” To show people just how safe they are, Steven was launching a dive to introduce people to diving and also to the friendly creatures with the bad rep.

I donned by skin-tight (read: painful) wet suit and slipped on a weight belt. My flippers were translucent and made my feet look blurry and retro. I was taught how to breath in a regulator and, for the first few breaths, had to talk myself into not throwing up. I put on a suction-cup mask, feeling my eyes pull slightly out of the sockets, and then I waddled up to the tank full of sharks and nearly threw up again. 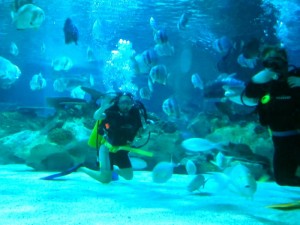 Once in the icy water everything changed. I wasn’t afraid of the beasts, I was curious. As soon as I got in the water I released the air in my buoyancy vest and slipped like a stone down to the bottom of the tank. What was odd was that it was a tank with a tunnel through the middle for spectators, and there I saw hundreds of Chinese school kids banging on the glass and waving. Was I in the zoo or were they?– because they looked blurry and hilarious from underwater. I waved, I did the pharaoh dance, I tried to do Thriller but two problems instantly emerged: A) I don’t know the dance and B) movements underwater are too slow. It looked, I’m sure, like I was suffering a slow seizure. Eventually I turned around and watched the other divers fall to the bottom and try walking around. They looked like baby camels when they try to take their first steps.

Right away we were swarmed with cool fish. Tropical ones like from The Little Mermaid. You can toss sand up in the water and the fish think it’s food and swarm you. Even after about five minutes of this the fish kept trying for the ‘food.’ Dumb little creatures, but good for amusement. We swam around the giant, giant tank. It was so big you could get turned around and lost. There is even a sunken pirate ship in the tank, which was awesome. My first wreak dive! 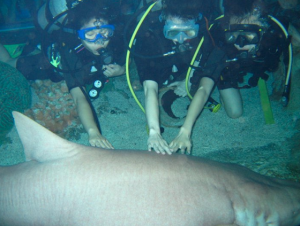 We swam right up to a shark, a giant grey thing with beady little eyes that never stopped watching us. The instructor showed us how to pet a shark. Basically, the same way you’d pet a cat, but with a million times more fear of random retaliation. He told us before we went underwater that we were 95% safe and while 95% is high, when it comes to sharks sometimes I wonder if it’s high enough. Still, I pet the shark, played with his fin, shook his little fish paw and smiled into my respirator so he’d know I was a nice human. Now I was the dumb fish who didn’t get the hint, I kept playing with the shark long after the curiosity left his eyes and they squinted into little slits. He was either bored or angry. That’s me in the center of the picture above, petting aforementioned shark.

There were about seven big sharks over two meters long in the tank, and one evil-looking shark whose characteristics I didn’t notice past it’s giant freaking teeth. Once you spot something like that underwater you realize just how slow you move. If the teeth-creature turned hungry or angry or bored or whatever other array of human emotions I’m attributing to it, he could easily catch and bite off my arms and legs like a Monty Python sketch before I could even turn around. But, our instructor really knew his stuff and he waved at the fish and then pulled our attention on to what he considered a cooler attraction. It isn’t an easy think to turn around and pay attention to something else when a shark is behind you. 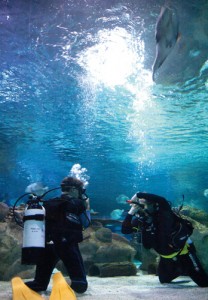 Still, what he was showing us was a giant sea turtle. He grabbed it by the shell and tossed it at me. I caught it like a giant Frisbee and pet the shell (like I said, it’s hard to tell who the dumb one is when playing with fish) and then shook his fin/hand thing and then poked his funny skin and tale and stuff until the instructor waved for me to toss it to the next diver. I felt bad doing all this, but who passes up the chance to poke a giant turtle? Not me.

We swam down to another sleeping shark and pet that one as well. A lot more petting goes on in the oceans than you’d think. For those of you rational enough never to have pet a shark let me describe some odd things that surprised me. 1) the skin is like old human skin, it isn’t like a fish’s. It’s rougher than human skin, but still bendy and taught and with some little hairs or something on it (how lucky you are to have this professional analysis of shark skin!) 2) You can feel their bones, and that reminds you that the rib cage is big enough for you to be curled up inside as you are digested. 3) the shark fin doesn’t look like a good ingredient for soup. I wish people wouldn’t eat it. 4) Shark eyes are tiny, but what’s more crazy is that they disappear when they shut their eyes so you can’t tell where they are. This is the creepiest part since they aren’t where the head indents at all, suddenly an eye just opens where a nose should be. It’s disarming and I think this is where Picasso got some of his first inspiration. 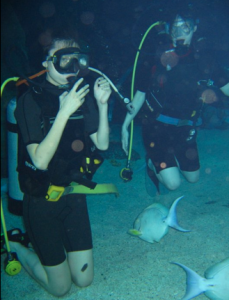 I survived my first dive, and got to the surface with only minor scraped and bruises (all self induced from scraping on coral or from throwing my head back and hitting it against the tank). I’m the person in the back, in the picture above.

Now that I’ve done it once I feel I’m hooked and I can’t wait to dive again!

3 thoughts on “Scuba Diving in Beijing”